Sateesh Khan: A journey that has just begun……

Sister Sateesh Khan is a Pakistan based actress, model and was a born Muslim, but like so many of us she realized the meaning of Islam and returned back. Since then she has given up Acting and modeling for the sake of Allah. Here is her story in her own words. May Allah reward her

The journey that has just begun. 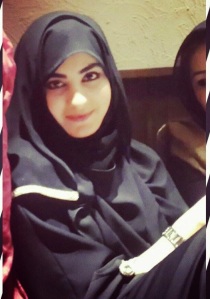 About 10 years ago when my parents split up. I had this urge to have a perfect family since. I grew up learning from the circumstances, from people around me, from places I travelled and live. I had a sister who died of Hepatitis at the age of 17 and I was only 11, my younger brother was 9 and elder one was 13. We had never heard of any sort of disease nor had we known that people can die so young. My family needed a strong leader to help fill the void left by the death of my sister.

It was a shock for the whole family, nobody could believe for years that she was gone. Though four of us left behind, I, My two amazing brothers and my mom were too affectionate.

I didn’t feel like I was lacking love or attention. But there’s always been something missing. I had trust issues and I wouldn’t make friends so quick. I used to be a very happy person and cheerful but a lot of things changed after the death of my sister.

It wasn’t just the pain of seeing my family break down in front of me and the shattering of the image of my father whom I idolized, nor was it the traumatizing loss of my amazing elder sister who I deeply loved, depended on and looked up to, but it was a loss of my innocence, of my vanished childhood and the resulting shattered belief in life. Inwardly I felt fate had abandoned me and taken away all that I held so dear. I would never let my pain be known and carried on with an outwardly smile.

By the time I was 16, I felt like my life was falling apart from an emotional aspect. As far as my Education, career and my future God had truly blessed me. I was so grateful and lucky that I’m physically in the position I’m in Alhamdulillah.

I took almost four years to find myself with the help of some amazing friends. I’m pretty sure most girls of my age go through this.

When I was 18 I started working as an Actress and made some really Good friends. My co-Actors Sarah Chaudhry, Mariam Ali, Affan Waheed, Jamal Shah, Layela Zuberi were like my family. I could totally be myself with them.

Strange thing was, every time we’d sit together we’d talk about GOD and nature and HIS creation. How we fit together in this world and It’s system. Because I’m very spiritual and always have been, I was really interested in all of this stuff. But if you talk about religion and Qur’an, I’d run away !!!

Well My Journey had begun then to Where I am today. I’ve lived a Kaafir’s life. I was only called a Muslim because I was born in a Muslim family otherwise I have done much to disappoint Allah Subhanahu Watalla and My Prophet (May peace and blessings be upon him).

I was looking for a miracle to happen. I was probably waiting for Angels to come down and wipe my tears off. And that actually happened, My friend Sarah . She had left Showbiz and moved to Abu Dhabi with her husband, went all religious. Definitely left me with too many questions.

One evening Sarah was online and she said to me I have a question to ask from the youth, She said “We know everything, somewhere back of our heads, we can differentiate the wrong and the right without getting confused. Then I fail to understand, WHY don’t we follow it”

My thinking process had increased and then I started feeling guilty and ashamed of myself. I hated myself like never before. I was upset because I used to be a really nice girl, I used to be loving, caring, disciplined and smart. And maybe I was feeling this way because I’ve always been extremely sensitive. The question that shook me was ‘’Why have I ruined myself into this worldly environment’’ I knew she was hitting me where it hurts the most. She knew I was capable of changing.

Is it Satan that took control over me? One by one I stared to Quit and eliminate the bad things and people from my life. I needed good influences. I needed motivation to stand up for the Truth. I didn’t really know what to do but I kind of knew that I’m not too far from the reality.

End of 2011, I find out Sarah is coming back to Pakistan. She invited me to this event, where she’s giving a speech and some other scholars & researchers are attending too. I and Mariam (My friend) had planned to go see Sarah to Islamabad few hours’ drive away from Lahore.

As we reach to the venue Faisal Mosque, my heart sank. The first tear dropped by just looking at that Masjid (Mosque) it looked so spiritual and peaceful. We walked across the corridor and I see book stalls left & right. Boys and girls are standing smiling selling Islamic books. They were so welcoming unconditionally Alhamdulillah that I almost forgot that this is the same world we live in. We entered the first Hall when I found out that the event was organized by Al-Shifa medical college. I was really excited because I was experiencing it for the first time.

The first hall we went to, all girls were sitting there and a fashion show was going on. Lol before you jump into any conclusions this was an ISLAMIC fashion show of Obaya’s (veils) and appropriate dresses for Muslim women. But I was probably expecting a little too much so for me it was almost inappropriate fashion show. As all girls were screaming out loud and they played this ugly music for the runway. Anyway after the show this lady walked up on stag, she wearing a beige coloured veil.

As she starts to talk, She said “Assalam o Alaikum, with the name of GOD here I am today to talk about the most important thing that our youth (especially girls) go through “The void”. Instantly my jaw dropped and I thought for the first time in my life and I MEAN IT (the first time) I was exactly where I was supposed to be. I felt like GOD is communication with me directly. All these years the questions I had on my mind. She had answered so easily in 20 minutes.

I and Mariam were in tears. As she kept giving examples of Hazrat Mariam R.A (Merry) Hazrat Ai’shah R.A (Aisha) Hazrat Khateeja R.A. Everytime She says Mariam, she says ‘Listen to me carefully’ I would look at my friend and we just didn’t know what was happening to us. That feeling can’t be described in words. That woman said this repeatedly ‘Build your connection, build your connection’

As we walked the second hallway I see this man preaching standing on the stage. He is a researcher named Adnan Rashid. He was talking about women in Islam. For an hour, I was listening to him. I was so involved that I didn’t know where I was and who were with me. I was in a state of shock and couldn’t see him clearly; he was a blur as tears wouldn’t stop rolling down my cheeks. My shawl was gone wet.

Changed the whole purpose of my life. The whole prospective towards this world. I walked out of that place promising to myself that I will bring the Revolution. I will be the motivation and I will inspire people. I had found my identity, I had found myself.

Because brothers and sisters, the fact that is undeniable is that we’ll have to face ALLAH subhanahu Wa talla one day, whether we want it or not. He definitely does not need worshipers but HE’s our creator right? Like our mother and HIS love for us is 70 times more than 1 mother, Imagine that passion of love and imagine its ‘unconditional’.

Imagine if HE loved me even after I neglected HIM so much. HE loved our Atheists, Jews and Christian brothers and sisters that they’re converting to ISLAAM every single minute of the day!!!

Ask yourself why? I did, and I found the answers.

WALLAHI we can’t even imagine the amount of Love that ALLAH has for us. Tears wouldn’t stop falling down my cheeks as I get flash backs of my life. I’m a sinful person and I’ve been so unfortunate not to accept ALLAH subhanahu Wa talla in my heart and how lucky I am today that I get an opportunity after everything that I have done.