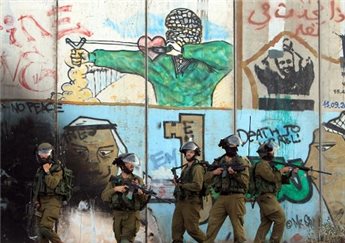 GAZA CITY (Ma’an) — A Hamas spokesman on Sunday accused Israel of “stalling” in ongoing negotiations in Cairo to achieve a long-term truce in Gaza, stressing that “the ball is in the Israeli occupation’s court.”

Hamas spokesman Sami Abu Zuhri said during a march in solidarity with Palestinian resistance in Rafah that the group’s “priority is to reach an agreement, but the occupiers must stop stalling.”

“We are discussing an agreement from a position of strength, not weakness,” he said, adding: “Either we have an agreement that meets our demands, or no agreement.”

“Israelis will not enjoy safety until our people do and the siege is completely lifted. (Israelis in the south) will only return home when Hamas allows them to, not when Netanyahu does,” he said.

Israel “must be ready for the consequences of the failure to agree,” he added.

The remarks come on the fourth day of a five-day temporary ceasefire in the hostilities that began more than five weeks ago with a massive Israeli aerial assault on Gaza that was followed by a major ground invasion.

On Sunday, medical authorities in Gaza said that the total death toll of the assault in Gaza had hit 2,016 and more than 10,193 injured, as dozens more Palestinians succumbed to wounds sustained during the bombardment.

Gaza-based spokesman for the Ministry of Health Ashraf al-Qidra told Ma’an that the massive increase in the number of dead also included a number of bodies that were pulled from the rubble as thousands of displaced families and rescue teams took advantage of the calm to return to their former homes.

Al-Qidra said that the dead included at least 541 children and 95 elderly, while 3,084 children and 368 elderly were among the wounded.

Indirect negotiations in Cairo between Israel and a Palestinian delegation with representatives of all major political parties including Hamas have offered a hope of reaching a lasting ceasefire and an end to the Israeli assault.

Despite signs of a potential agreement at the end of the current five-day temporary ceasefire, however, it is still unclear whether a deal is in the works, the temporary ceasefire will be re-extended, or hostilities will recommence Monday at midnight when the ceasefire ends.

The Palestinian delegation has insisted that any long-term truce include the end of Israel’s eight-year siege on the Gaza Strip, release of dozens of prisoners whom Israel has re-arrested that were released in 2011 as part of the Shalit exchange, re-opening of a seaport and airport in Gaza, and creation of a safe passage between the West Bank and the Gaza Strip.

Israel, however, has countered that any agreement should include the demilitarization of the Gaza Strip, which Palestinians resolutely reject, particularly in light of the recent assault.

Israeli Prime Minister Benjamin Netanyahu said on Sunday that Israel will not agree to any long-term ceasefire in Gaza at indirect talks in Cairo unless its security needs are clearly met.

“The Israeli delegation in Cairo is acting with a very clear mandate to stand firmly on Israel’s security needs,” Netanyahu told ministers at the start of the weekly cabinet meeting in Jerusalem.

“Only if there is a clear answer to Israel’s security needs, only then will we agree to reach an understanding,” he said, as Israel’s negotiating team made its way back to Cairo for the talks.

In a sign that the gaps between the two sides are unlikely to be bridgeable, Netanyahu warned that Hamas would not chalk up any diplomatic successes in Cairo.

“If Hamas thinks it will make up for its military losses with a political achievement, it is wrong,” he said.

“If Hamas thinks that by continuing the steady trickle of rocket fire it will force us to make concessions, it is wrong,” he said.

Ahead of Sunday’s cabinet meeting, ministers insisted there would be no long-term truce agreement, nor would the Palestinians win Israel’s agreement to the establishment of a port or airport without Gaza first being disarmed.

“We have to insist on the matter of demilitarization,” Intelligence Minister Yuval Steinitz told reporters.

“A sea port and or an airport without demilitarization is like a duty free for missiles and rockets,” he said.

Top diplomats from the European Union said on Friday that a durable ceasefire must mean “all terrorist groups in Gaza must disarm” in a statement welcomed by Israel’s foreign ministry which said it was the only way to ensure a “fundamental change” of the situation.

“There won’t be reconstruction without Gaza’s demilitarization, and there won’t be a ceasefire without quiet for those in the south,” Finance Minister Yair Lapid told reporters.

Economy Minister Naftali Bennett, a cabinet hardliner, called for an immediate end to the talks in Cairo, urging Israel to implement its own unilateral initiative thereby avoiding the need to sign any form of agreement with Hamas.

“Any agreement which ties our hands will just speed up the next war,” he said in a statement.

AFP contributed to this report