Why does Allah allow suffering and evil in the world?

Indeed Allah is All-Powerful (Al-`Aziz) and He is able to do all things (Allahu ‘ala kuli shayin qadir). The Quran has mentioned this hundreds of times. It is also mentioned in the Quran that Allah is the Creator and He is the Best Creator. Glory be to Allah, the best Creator. (Al-Mu’minoon: 14)
But then the question comes why do pain and sufferings exist in the world. We find sickness, old age and death. We see things that are ugly, people who are insane and foolish. There are storms, earthquakes, floods, draught and famine. We also see people commit sins, show disloyalty, unfaithfulness, greed and insincerity. We see people commit rapes, murders; they fight and make wars. We know all these and many more problems. There are evils caused by human beings and there are natural disasters. There are suffering for individuals and there are those that involve a large number of people.

But we also know that this is not the whole story. Besides all these negative things, we also see beauty, health, prosperity, life, birth, wisdom, intelligence, growth and progress. We also see goodness among people, faith, sincerity, charity, love and the spirit of sacrifice. We also see a lot of virtue and piety. It is wrong to see one side of the coin and not to see the other side. Any philosophy that concentrates on one aspect of the creation and denies or ignores the other side is partially true and partial truths are no truth at all.

END_OF_DOCUMENT_TOKEN_TO_BE_REPLACED

Imam Ridha’ (‘a) narrated from his fathers from Imam Amir ul Mu’mineen ‘Ali (‘a) from the Holy Prophet (S) who said: “Woe to the woman who makes her husband angry, and happy is the woman whose husband is pleasantly contented with her.”

The Holy Prophet (S) said: “He who has two wives and does not treat justly in dividing his self and his wealth between them, he will be raised on the Resurrection Day while he is chained in punishment and half of his body is not straight until he enters Hell.”

Imam al-Baqir (‘a) said: “He who takes a woman (marries) should certainly respect her, because the wife of anyone of you is a means of your pleasure, so the one who marries a woman should not spoil or disgrace her (by disregarding her respectable rights).”

Imam Amir ul Mu’mineen ‘Ali (‘a) said: “In any condition conciliate the wives, and talk with them warmly and through kind words, thereby, they may change their actions into good ones.”

Imam Musa ibn Ja’far (‘a) narrated from his father (‘a) from the Holy Prophet (S) who said: “However much the Faith of a man increases, his regard for women increases.”

The Holy Prophet (S) said: “From the things of the world, I regard women and perfume highly, but prayer is the light of my eyes, (the love and worship of Allah).

Imam Amir ul Mu’mineen ‘Ali (‘a) said: “The worst man is he who restricts his household.”

ISIS militant talks about US funding

Yousaf al Salafi – allegedly the Pakistan commander of Islamic State (IS) or Daish – has confessed during investigations that he has been receiving funds through the United States.

Law enforcing agencies on January 22 claimed that they arrested al Salafi, along with his two companions, during a joint raid in Lahore. However, sources revealed that al Salafi was actually arrested sometimes in December last year and it was only disclosed on January 22.

“During the investigations, Yousaf al Salafi revealed that he was getting funding – routed through America – to run the organization in Pakistan and recruit young people to fight in Syria,” a source privy to the investigations revealed to Daily Express on the condition of anonymity.

END_OF_DOCUMENT_TOKEN_TO_BE_REPLACED

Globally the Muslim Ummah is in a crisis. From Australia in the south to Canada in the north, from China in east to USA in the west we find Islamophobia raising its venomous head. The “War on Terror”, persecution, oppression, discrimination, etc against innocent and peace loving Muslims has become the order of the day. The raining of missiles on families in Palestine-Gaza , the merciless killing of innocent civilians in Syria, ethnic cleansing in Myanmar, torture and rape in Afghanistan and Iraq,the banning of niqaab in France, war in Somalia, Chechnya etc. The list is extensive.

As Muslims we should not turn a blind eye and be apathetic to the sufferings of millions of our fellow brothers and sisters globally. We should not only feel the pain in our hearts, but should constructively engage ourselves in physically assisting the Ummah with whatever means we have at our disposal.

The Messenger of Allah (peace be upon him) has emphatically stated that “No one of you becomes a true believer until he likes for his brother what he likes for himself”.(Hadith-Bukhari & Muslims)

We are ONE UMMAH, if the finger feels a pain the whole body feels the pain. It is our duty to share the pain, responsibilities, burdens and needs of our fellow brothers and sisters.  The Messenger of Allah (peace be upon him) said: “The example of Muslims in their mutual love, mercy and sympathy is like that of a body; if one of the organs is afflicted, the whole body responds with sleeplessness and fever.”(Hadith-Muslim)

END_OF_DOCUMENT_TOKEN_TO_BE_REPLACED

The Blessings and Benefits of Fajr Prayer in Islam

“Those who believe and do deeds of righteousness, and establish regular prayers and regular charity — they will have their reward with their Lord. On them shall be no fear, nor shall they grieve.”

Consistent and daily prayer practice constitutes one of the Five Pillars of Islam, holding a place of such importance and benefit that the Holy Prophet Muhammad (SAWS) stated that it is the observance of daily prayers that delineates belief from disbelief.

And it is one of the great gifts of Islam that Allah Almighty has enjoined prayers upon believers, in effect providing a means to fortify and continually reinforce faith and belief, and to continually remember, for indeed, “faith without works is dead.”

END_OF_DOCUMENT_TOKEN_TO_BE_REPLACED

Madame Rothschild – “I Know who was behind the Paris Attacks!”

Madame Rothschild tells Lasha Darkmoon in a private email that the Charlie Hebdo affair was a Mossad operation.

Brief introductory note by Lasha Darkmoon: I have just received an electrifying email from my friend Ellie Katsnelson, aka Madame Rothschild, a German aristocrat of Rothschild parentage who has fallen out with her “family” after certain traumatic events during her adolescence, including the mysterious death of her mother in the Swiss Alps in 1989 (See her mini-biography below).

The email was sent to me on Sunday, January 11, 2015 5:56 AM, i.e., yesterday. I transcribe it exactly as written, except for one or two minor alterations in the interests of extra clarity.

Reader, you must make up your own mind if there is any truth in these chilling revelations. I myself remain undecided, as is my custom, preferring to keep an open mind until the facts have been clearly established.

I won’t write to the  Comments section of your website, as you suggest, because I cannot help feeling that it is juvenile to do so. But this I will say most emphatically, based on my private sources, for as you know, I am a resident of France and have many friends in high places in Paris and elsewhere: not only do I believe that the Paris circus was not done by the Muslims, I actually know for a certainty that it was not.

Muslims had nothing—I repeat, nothing—whatever to do with the carnage that took place in Paris last week.

END_OF_DOCUMENT_TOKEN_TO_BE_REPLACED

See the perfection of Allah in the different creatures (Video)

Sh. Haitham: My first response to the Paris incident 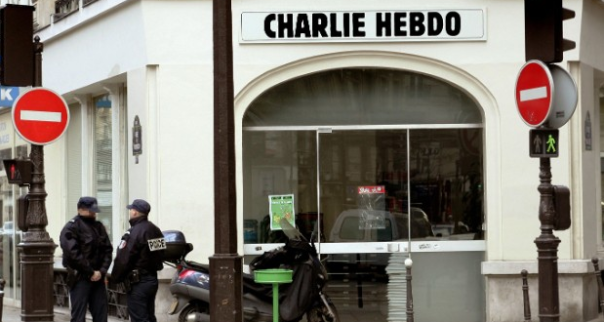 “Allāh and His angels send blessings on the Prophet: O you who believe! Send your blessings on him, and salute him with all respect.”[1]

Alḥāmdulillāh, today is the auspicious day of Jumuʿah (Friday), a day for which we know as reported by Aus b. Aus (raḍiy Allāhu ʿanhu) that the Messenger of Allāh (sall Allāhu ʿalayhi wa sallam) said:

“Among the best of your days is Friday; so supplicate Allāh more often for me in it, for your supplications will be displayed to me.” He was asked: “O Messenger of Allāh! How will our blessings be displayed to you when your decayed body will have mixed with the earth?” He (sall Allāhu ʿalayhi wa sallam) replied, “Allāh has prohibited the earth from consuming the bodies of the Prophets.”[2]