END_OF_DOCUMENT_TOKEN_TO_BE_REPLACED

This groundbreaking NRDC documentary explores the startling phenomenon of ocean acidification, which may soon challenge marine life on a scale not seen for tens of millions of years. The film, featuring Sigourney Weaver, originally aired on Discovery Planet Green.
More documentaries…

Function of the Pineal Gland 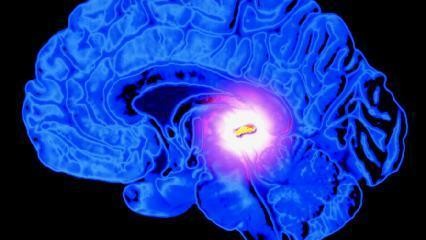 The pineal gland is one of the smallest and most important endocrine glands in the body. Located in the center of the brain close to the more well-known pituitary gland, the pineal gland gets its name from its characteristic pine cone shape. It is also known as the pineal organ, the pineal body or the “third eye”. This small gland controls your body’s sleep-wake pattern. However, due to lots of factors, calcification of pineal gland can occur, hampering brain function. Remedies to decalcify the brain should immediately be taken.

END_OF_DOCUMENT_TOKEN_TO_BE_REPLACED

Photographs of The Rupture Of Perito Moreno Glacier

END_OF_DOCUMENT_TOKEN_TO_BE_REPLACED

A three-pronged approach has been developed to remedy the global food shortage.

With the population of the world expected to hit 9.7 billion by 2050, it’s no secret that reliable, sustainable, and nutritious food sources need to be developed today to provide for the future tomorrow. But the outlook of providing enough food for future generations is skeptical at best, and scientists, researchers, and farmers are concerned that not enough is being done in the present to prevent food-related catastrophe.

However, some individuals do hold positive outlook that if given the right tools for change and support, another 3 billion people could be fed from sustainable farming methods.

Paul West, from the University of Minnesota in St. Paul, along with colleagues believe that if‘given the right levers’, feeding the whole world will be possible. The team believes that the majority of food production problems stem from just a handful of countries, and if such areas could be concentrated on, three billion more people could potentially be fed, along with reduced environmental damage. 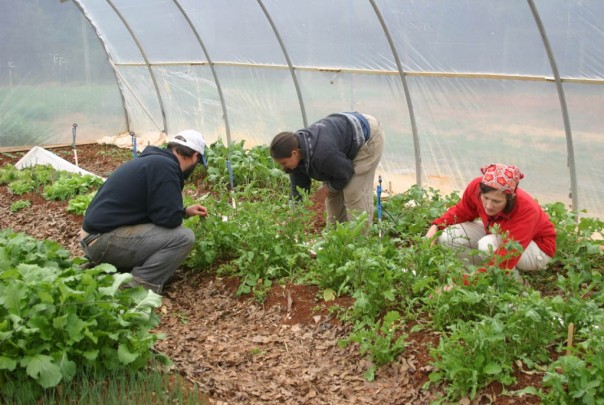 “The way we are growing agriculture right now is totally not sustainable.” said West

West and his colleagues have been looking for “leverage points”, or areas with the most potential to change how we grow food. The team focused on the 17 crops that represent 86 percent of the world’s crop calories and consume the most water and fertilizer. From their findings, they developed a three-pronged approach to remedy the global food shortage situation.

Stated Greg Asner of the Carnegie Institute for Science in Stanford, California, “They’re taking a high-altitude view of all the possible points that need to be made if we’re going to feed a planet full of people. It’s incredibly valuable to have all that in one place.”

The study led by West suggests three fundamental areas where food production can be boosted and grown sustainably, leading to increased yields from unproductive farms, decreased amount of waste produced, and change in the way people eat.

In the map below, highlighted areas depict where the most money could be saved. 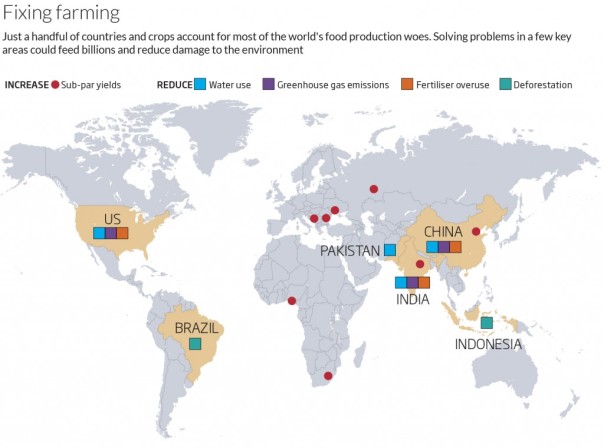