Palestinian statehood bid fails at UN Security Council as US, Australia vote against

The UN Security Council has failed to adopt the Arab coalition’s bid calling for the creation of a Palestinian state and an end to Israeli “occupation”. The veto power US and Australia voted against the move with 5 abstentions.

The draft resolution gathered only 8 votes in favour, so it was automatically defeated. The US however still used its veto power and voted against the resolution. Another veto power state, the UK, along with Lithuania, Nigeria, Korea and Rwanda have abstained from the vote.

END_OF_DOCUMENT_TOKEN_TO_BE_REPLACED 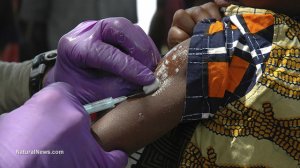 Tetanus vaccines given to millions of young women in Kenya have been confirmed by laboratories to contain a sterilization chemical that causes miscarriages, reports the Kenya Catholic Doctors Association, a pro-vaccine organization.

A whopping 2.3 million young girls and women are in the process of being given the vaccine, pushed by UNICEF and the World Health Organization.

“We sent six samples from around Kenya to laboratories in South Africa. They tested positive for the HCG antigen,” Dr. Muhame Ngare of the Mercy Medical Centre in Nairobi told LifeSiteNews. “They were all laced with HCG.”
END_OF_DOCUMENT_TOKEN_TO_BE_REPLACED

Rosalind Peterson addresses the UN on Chemtrails And Geoengineering (Video)

Rosalind Peterson addresses the United Nations on September 3-5, 2007 in New York at the 60TH Annual DPI/NGO Conference on Climate Change, and Confirms that Chemtrails, Geoengineering, SRM are very real. If you are still in doubt that those lines in the sky are contrails or that the milky haze which lingers all day is nothing to worry about, then you need to open your eyes and WAKE UP!

The UN In Haiti: Ten Years Of Controversy (Video)

A cholera outbreak which left thousands dead, sexual abuse, murder and crackdowns on protesters – a look at MINUSTAH, one of the most controversial UN peacekeeping deployments.

The Syrian refugee crisis has exploded from about 270,000 people a year ago to today’s tally of more than two million who have fled the country. The pace of the diaspora has been characterized by the United Nations as the worst since the Rwandan genocide in 1994. In addition, an estimated 4.25 million Syrians have been displaced within their country, bringing the total number forced into flight to more than six million.

END_OF_DOCUMENT_TOKEN_TO_BE_REPLACED

Israel has been refusing to allow employees of Amnesty International and Human Rights Watch to enter the Gaza Strip in order to conduct their own independent investigations into the fighting, using various bureaucratic excuses.

Both human rights organizations have been trying to obtain permission from the Civil Administration to enter Gaza since July 7. Two different reasons have been cited for the refusals: The first is that the Erez border crossing between Israel and the Gaza Strip is closed and no entry permits are being granted until further notice; the second is neither group is registered with the Social Affairs Ministry as a humanitarian aid organization.

In fact, Erez was open throughout most of Israel’s Operation Protective Edge, which began on July 8. Among others, journalists, United Nations employees and Palestinians needing medical care or returning from abroad (with special permits), were allowed to pass through.

END_OF_DOCUMENT_TOKEN_TO_BE_REPLACED

The United Nations’ top humanitarian official in the Middle East yesterday issued an impassioned appeal for a new deal for Gaza to end the “collective punishment” of its 1.8 million inhabitants imposed by Israel’s seven-year blockade of the territory.

As Egyptian mediators prepared to renew efforts today to persuade Israel and Hamas to agree a durable peace deal to end more than a month of conflict, Pierre Krähenbühl, Commissoner General of the UN Palestinian refugee agency UNRWA, warned: “You cannot just return to the pre-existing conditions under the blockade.”

The ending of the blockade is one of Hamas’s key demands in the Cairo peace talks. Yesterday, Hamas’s head of foreign affairs, Osama Hamdan, said on his official Facebook page that Israel’s position did not meet the aspirations of the Palestinians. And he warned: “Israel must accept the demands of the Palestinian people or face a long war.”

END_OF_DOCUMENT_TOKEN_TO_BE_REPLACED

Famine has claimed the lives of over a million people in the Horn of Africa (which includes Ethiopia, Somalia, Sudan, and South Sudan). So what are the causes of famine, and what makes it different than food insecurity? And what criteria does the United Nations use to declare a famine?