Flight MH17 – What You’re Not Being Told (Video)

By: Shaun Walker in Kiev, Harriet Salem in Grabovo and Alec Luhn in Moscow

The president of Ukraine has accused pro-Russia rebels in the east of the country of shooting down a Malaysia Airlines jet with a ground-to-air missile, killing all 298 people on board as the airliner exploded and rained down in fiery pieces over a rural Ukrainian village.

The huge loss of life threatens to have wide-ranging and unpredictable consequences, coming just after the US imposed further sanctions on Russia for continuing to provide weapons to the rebels. Defence and security experts said the Russian-made Buk surface-to-air missile system, known to be in the hands of pro-Russia fighters in Ukraine, was most likely used.

The US vice-president, Joe Biden, said the plane had been “blown out of the sky”, while the Ukrainian authorities released an audio recording said to be rebel commanders apparently realising their forces were responsible.

The jet, which was flying from Amsterdam to Kuala Lumpur, came down near the village of Grabovo, part of the area controlled by pro-Russia separatists, on Thursday.

It had been flying 1,000ft above restricted airspace, according to the European air traffic control body. Eurocontrol said Ukrainian authorities had banned aircraft from flying at 32,000ft or below and the doomed aircraft had been cruising at 33,000ft – however this apparently still left it within range of the sophisticated surface-to-air weaponry that pro-Russia forces have been using recently in the Ukraine conflict. All civilian flights have now been barred from the area of eastern Ukraine.

A partial breakdown of passenger nationalities was released early on Friday, showing that 154 Dutch nationals, 43 Malaysians and 27 Australians were on board, along with nine passengers believed to be from the UK, four each from Germany and Belgium, three from the Philippines, one Canadian and 41 unverified. A group of international HIV/Aids experts flying to Melbourne were among those killed. Included in those numbers were the flight crew of 15, all Malaysian.

Malaysia’s prime minister, Najib Razak, said: “If it transpires that the flight was shot down, we insist that the perpetrators must swiftly be brought to justice.” His country was sending a disaster response and assistance team to Ukraine.

The Australian prime minister, Tony Abbott, said the world should be “filled with revulsion” at the plane’s destruction and said “Russian proxies, using Russian-supplied equipment” may have been responsible. Australia’s foreign minister, Julie Bishop, said that if MH17 had been shot down it amounted to an “unspeakable crime” and a full international investigation must be allowed to take place. She said pro-Russia rebels, said to have retrieved the plane’s black box flight recording equipment, must hand it over to authorities.

The British foreign secretary, Philip Hammond, said: “We do believe that there were British nationals on board the flight. We are working through passenger data, cross-checking it and referencing it to establish exactly the numbers and identities of those British nationals.”

The field next to the tiny hamlet was a scene of charred earth and twisted metal as shocked local people milled around the scene. Body parts belonging to the 298 people on board were strewn around. The body of what appeared to be a young woman was flung about 500m from the centre of the crash.

US government officials confirmed to media outlets that a surface-to-air missile brought down the plane. US intelligence was reportedly still working to determine the exact location from which the missile was fired, and whether it was on the Russian or the Ukrainian side of the border.

Rebels in the self-declared Donetsk and Luhansk people’s republics have shot down several Ukrainian planes and helicopters in recent weeks. But they insisted they had no part in the downing of MH17, claiming instead that Ukrainian fire was responsible. 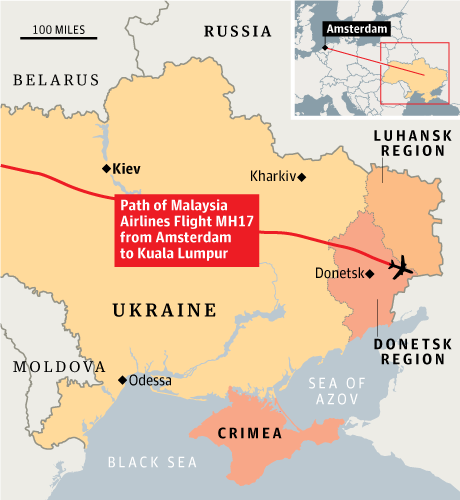