This video was part of a larger event with other presentations and discussion, hosted in June 2015 Abu Dhabi by the Salama Bint Hamdan Al Nahyan Foundation.

By virtue of being created as human beings, we will be tested. We will be thrown into countless trials, into situations that may arise unpleasant and awkward, and into times of difficulty when it seems as though there is little reason to hope.

END_OF_DOCUMENT_TOKEN_TO_BE_REPLACED 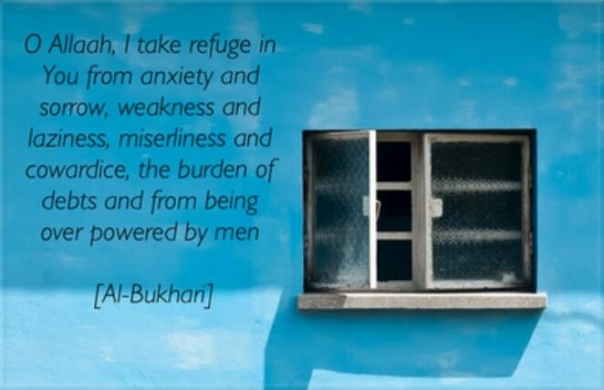 Anxiety is an unavoidable part of life. Everyone in this world will have his or her share of worries. However, there are limits to how much worry there should be. Worry should not lead us to despair.

Some people try so hard to avoid anxiety that they are unable to cope with the real world. By fleeing from reality, they merely increase their worries.

We need to cope with our anxiety in a rational, methodical way.

END_OF_DOCUMENT_TOKEN_TO_BE_REPLACED

Strength doesn’t come from what you can do; it comes from overcoming the things you once thought you couldn’t do.

Strength doesn’t come from what you can do; it comes from overcoming the things you once thought you couldn’t do.

Anxiety is an unavoidable part of life. Everyone in this world will have his or her share of worries. However, there are limits to how much worry there should be. Worry should not lead us to despair.

Some people try so hard to avoid anxiety that they are unable to cope with the real world. By fleeing from reality, they merely increase their worries.

We need to cope with our anxiety in a rational, methodical way.

First of all, we need to stop making unrealistic demands upon ourselves and upon the society in which we live. Many people worry over problems that are far beyond their scope to deal with. These problems are often so great that society as a whole cannot hope to solve them at the present time. Worrying about these matters does nothing but cause anxiety.

There is an old Arabic parable that goes: Once there was a desert dweller who owned a servant girl. Someone asked him: “Wouldn’t you dream that instead of possessing this servant girl you could be Caliph?”

He replied: “God no!” When the other asked him why, he said: “I am afraid that then both the servant girl and the nation would be lost!”

Now there is a man who knew what he should not be bothered with.

The second thing that we must do to get anxiety under control is to find contentment with the situation in which we find ourselves. This does not mean that we always have to accept things the way they are. We should definitely have dreams and ambitions. `Umar b. `Abd al-`Azîz said: “I am an ambitious man. First, I desired governorship. When I attained it, I desired to be Caliph. When I became caliph, I renounced its pleasures, for then my ambitions had turned to attaining Paradise.”

We should have ambitions, but we should also see the good in what we already have.

The third thing that we must do is to enjoy our successes. All of us have some achievements to our credit. We need to take satisfaction and pride in them, as this helps to prevent us from making light of Allah’s blessings.

Finally, we must refrain from envying others. Whatever someone else has is purely from Allah’s grace. Allah gives whatever He wills to whomever He pleases. A single woman should not get upset when she sees her sister getting married. A married woman should not fret when she sees another woman married to a man of far greater wealth and prestige. A divorcee should not cry whenever she sees someone else living in marital bliss. Instead, she should take a deep breath and say: “Praise be to Allah who has placed me in my good circumstances.”

We should appreciate that today is better than many days in the past, and with Allah’s blessings, tomorrow can be even better than today. Those who prefer to dwell in the past keep themselves in permanent sorrow thinking about missed opportunities and what might have been.

We must not look to the lost opportunities of the past. We must instead look forward to the promise of a better future.

Ibn Hazm mentions that he took a good look at people, all people – Muslims and non-Muslims, righteous and ignoble, Arabs and non-Arabs – and made the following observation: “I found that they all had one thing in common; they all sought to rid themselves of their problems and worries.”

He then said: “So I decided to unlock the secret to this matter and discover the best way to overcome our worries. I found that there was nothing better for this than to worship Allah, adore Him, and to submit ourselves to Him fully. From this I realized that the guidance of the Prophets and Messengers (peace be upon them) is comprehensive of what dispels the concerns of both this world and the next.”

There are many things in this world that inspire fear. However, we can find security in true reliance upon Allah and in reconciling ourselves to His decree.

Our fear is often worse that the things we are afraid of. Sometimes we fear some crisis occurring and that fear becomes a crisis in itself. Our fear of sickness may actually be the worst sickness to afflict us.

Do not grieve and do not be afraid. Allah says: “Verily, those who say ‘Our Lord is Allah’ then keep themselves upright, the angels descend upon them saying: ‘Do not fear and do not grieve. Hearken to glad tidings of the Paradise that you have been promised’.” [Sûrah Fussilat: 30]

Ibn Jawzî said: “I was plagued by a problem that compelled me to continuously suffer from worry and anxiety. I began to go to great lengths trying to figure out any ruse or strategy to rid myself of that problem, but to absolutely no avail. Then I remembered the verse: “And whoever fears Allah, Allah will provide for him a way out.” Then I realized that fear of Allah is a way out of every worry. No sooner did I resolve to strengthen my fear of Allah than I found a way to solve my problems.”

It does not behoove a created being to pin his trust, his hopes, and his thoughts on anything besides his obedience to Allah and his fulfillment of Allah’s command. Obedience to Allah is the reason for opportunities to open up for us. A person who fears Allah should always keep in mind that Allah is sufficient for him.

ABDUR RAHEEM GREEN: OVER COMING YOUR DESIRES AND GAINING SELF CONTROL (VIDEO)

TheDeenshow with special guest abdur raheem green who will be talking about the human desires and the importance of self control and being able to overcome ones desires and not letting your desires overcome you.
More episodes…