Families return to Beit Lahia in northern Gaza to pick up the pieces but find their homes almost completely destroyed. 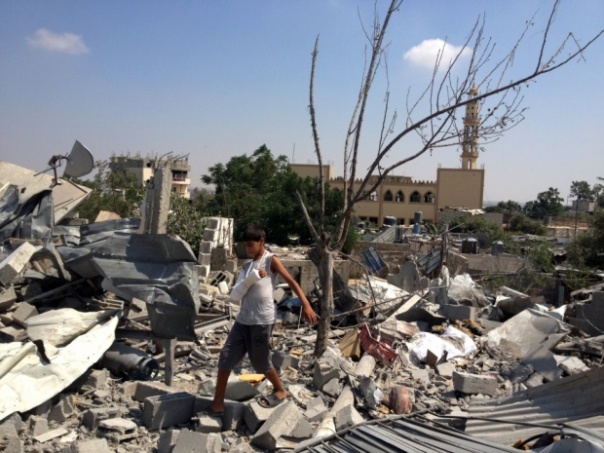 BEIT LAHIA, Gaza Strip – When Israel and Palestinian factions announced a 72-hour ceasefire, Umm Feras Abuelneen, 35, had few choices left open to her except to return to her apartment at al-Nada residential towers in Beit Lahia.

She expected little, but what met her eyes when she reached her home in the northern Gaza Strip was worse. The whole apartment was bombed and smashed. Dust and debris lay scattered everywhere, as if a hurricane had smashed straight into the center of it.

“They [Israel] bombed the hell out of our homes, with their Hellfire missiles, drones, tank-shells and gas which irritates the skin and eyes of my children,” says Abuelneen.

END_OF_DOCUMENT_TOKEN_TO_BE_REPLACED

On the ground in Gaza: Families celebrate Eid-al-Fitr (Video)

Families in Gaza try to celebrate Eid-al-Fitr, the festival at the end of the holy month of Ramadan, among the continued bombardment by the Israeli army. Noor Harazeen reports for Middle East Eye.