It’s day two of resumed airstrikes and more people dying in Gaza. With an exiled senior Hamas leader saying their group is responsible for the kidnapping of three Israeli teens, it doesn’t seem like things will calm down anytime soon. 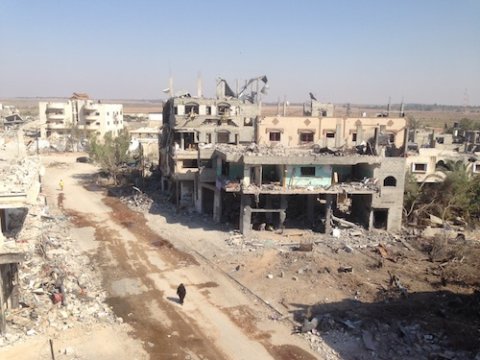 As the five-day ceasefire between Israel and Hamas took hold on August 15, residents of Shujaiya returned to the shattered remains of their homes. They pitched tents and erected signs asserting their claim to their property, sorting determinedly through the ruins of their lives.

END_OF_DOCUMENT_TOKEN_TO_BE_REPLACED

Military says there is a personal price to pay when carrying out attacks against Israelis. Shiulie Ghosh speaks to Avi Bell – a professor of law at Bar-Ilan University and a specialist in international and property law; Bill Van Esveld – an Israel and Palestine researcher at Human Rights Watch, and a specialist in human rights law and armed conflict; and Jeff Halper – director of the Israeli Committee Against House Demolitions.

Source: The Netherlands for Palestine

There is no electricity, there is currently looking for an alternative. Photo: 08-11

Israel has hit the Gaza Strip with missiles and artillery for the first time in three days, while Palestinian fighters launched a barrage of rockets at Israel, just hours after a ceasefire between the two sides expired.

An Israeli air strike killed a 10-year-old child in Gaza City, the first death reported since a 72-hour truce expired at 8am (05:00 GMT), while three others were killed in a drone strike in the Khan Younis district, Palestinian medics said on Friday. The number of injured in the last 10 hours were also up from six to 22.

The Israeli army said that as of Friday afternoon, more than 45 rockets were fired into southern Israel after the truce ended. Three of the rockets were intercepted by the Iron Dome missile defence system. Two Israelis were wounded, the army said.