Nadav Bigelman, who served as a combat solider in the Israeli Defence Force between 2007 and 2010, made the remarks as footage emerged appearing to show IDF troops arresting a young disabled Palestinian child two weeks ago.

On August 4, 2014 the IDF released what they claimed to be scans of a captured Hamas combat manual which explains the benefits of human shields (Captured Hamas Combat Manual Explains Benefits of Human Shields). This juicy story got quite a few people excited, and within 2 days their blog post had over 81,000 likes on Facebook. It turns out though, that the documents that they uploaded were forgeries, and sloppy forgeries at that. The work was so shoddy that you don’t even have to be an expert to see the mistake. Let’s take a a look.

END_OF_DOCUMENT_TOKEN_TO_BE_REPLACED

The IDF (Israeli Defense Forces) began their current operation against Hamas after three teens were kidnapped and killed. The military op has already claimed over 1,500 civilian lives in Gaza. The fragile humanitarian ceasefires end within minutes of creation pushing the region into further bloodshed. 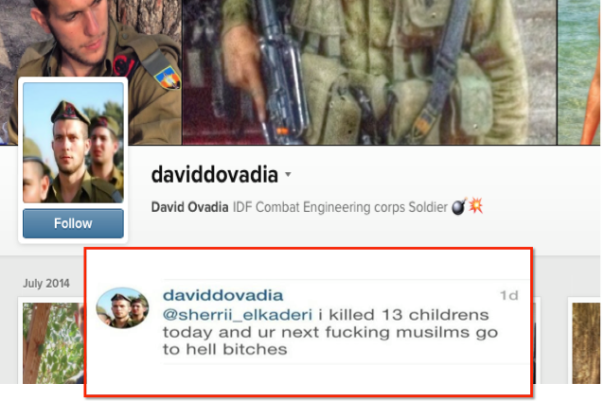 Excuse the disrespectful manners. What else do you expect from a Zionist? I made sure that he said this statement. His account is active; it’s real.

How about this world? He said it him self. Do you still think he is out there with his Israeli army bombing people in Gaza to “eliminate” Hamas? No, they want to eliminate all Palestinians.

This is not about Hamas.

BBC news is absolutely pathetic! ‘Kids killed by a misfiring Hamas rocket’??? And they are getting their news from the IDF?? Is this some kinda joke? You expect IDF to tell you they are children killers? Does the IDF and BBC really think people are that stupid? Tweet @BBCbreaking. We should not let this go. This is extremely offensive and disrespectful.

95% American-made: Where do Israel’s bombs & bullets & come from (Video)

Many weapons used by Israel come from the US, a major supplier to the IDF. RT’s Marina Portnaya reports.