Documentary: And Sanctify My House – The Department of Cleaning and Furnishing (Video)

The Mosque: an oasis for hearts and eyes

Seeking spirituality takes one places. To accelerate the devotional progress of their souls, devout Christians head to their churches. Observant Jews find themselves en route to their synagogues. And how many a foot is laid upon the earth striding toward a temple in pursuit of the same holy reason?

Yet it is the Muslims, since centuries ago, who have been used to relinquishing the demands of their chaotic selves at the five punctuations of their stated night and day in the heavenly atmosphere of a mosque, a masjid. Its breathtaking structure speaking volumes of the architectural masterminds behind it, the bona fide objective of this divine enclosure is in no way insignificant.

END_OF_DOCUMENT_TOKEN_TO_BE_REPLACED

1. The Hassan II mosque, also called the Grand Mosque of Hassan II, is the the second largest mosque and third largest religious building in the entire world. The only mosque larger is in Mecca, and the minaret on the Grand Mosque is the tallest one around the globe, even taller than the one located in Mecca.

2. Most Casablanca Morocco hotels offer a view of the mosque, which is not difficult considering it towers over the city and surrounding area. This mosque was not completed until the year 1993, and it took 7 years to build during which the work was done around the clock by thousands of craftsmen and laborers.

END_OF_DOCUMENT_TOKEN_TO_BE_REPLACED

When we know the status of something, it is easier to honor it. Unfortunately, Muslims today do not honor the mosques as they should be honored. We know that the masjid is the House of Allah, but we fail to internalize the nobility this title holds. When any object or person is connected to the Grand Name of Allah, it shows prestigious rank. For example, Allah

calls some of His exclusive slaves, “ebaadur-Rahman”, the slaves of the Most Merciful. By connecting them with His Name; Allah is honoring them. Similarly, the masajid are known as “Buyutullah”, the Houses of Allah. Of all the places on this earth, the Prophet

. Think about it: Our Lord loves the masajid! Even the name holds great honor; “masjid” literally means “place of prostration (sujud)”. They are the greatest places to worship Allah and to remember Him. Allah

The Hassan II mosque can hold up to twenty five thousand people, and the complex covers over nine hectares. There is a balcony for women which can hold up to five thousand, and the main floor of the mosque allows another twenty thousand. The courtyard is large enough to accommodate another eighty thousand individuals. The Hassan II mosque includes some modern elements, such as a heated floor, doors which operate on electricity, and a floor made from glass so the ocean below can be viewed. The roof also offers modern features, and can be opened up on days when the weather is nice.

END_OF_DOCUMENT_TOKEN_TO_BE_REPLACED 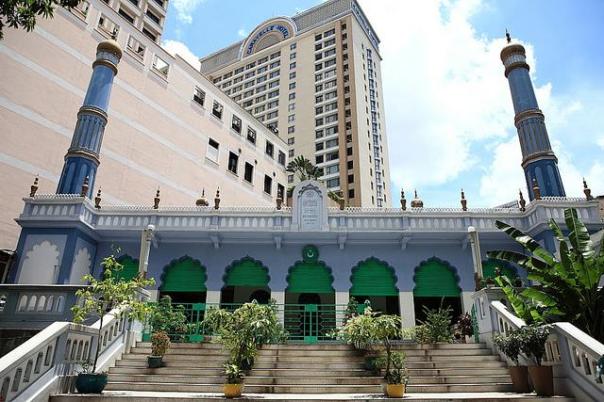 Muslims have bounced back from some of the worst bombing and destruction of the 20th Century. Look at the entrance to the House of Allah in Saigon, Vietnam!!! (The Blue and White Saigon Central Mosque). Al Hamdulillah, the Light of Allah will always shine.
By: Abdullah Hakim Quick

What an amazing atmosphere for Eid Prayers at Masjid Tuanku Mizan in Putrajaya, Malaysia with 25 000+ brothers and sisters. Truly memorable. Alhamdulillah – Mufti Menk