What if you were invited to your own funeral? (Video)

Tags: death, dutch, francais, france, frans, funeral, invited, lesson, life, nederlands, own funeral, subtitle, subtitled, subtitles, video, vlaams, watch, what, what if, what if you were invited to your own funeral

CAIRO – A YouTube video shared by a Saudi paper has showed 500 Chinese Muslims reverting to Islam after being touched by the “simplicity” of the funeral of the late King Abdullah bin Abdul Aziz.

“They all became Muslims after chanting through loudspeakers ‘there is no God but Allah, Mohammed (PBUH) is the messenger of Allah,” the YouTube film, published by Ajel Arabic language daily, said.

The video showed the Chinese workers gathering near their company offices in the eastern town of Jubail and reciting the Shahada, or the declaration of faith.

END_OF_DOCUMENT_TOKEN_TO_BE_REPLACED

Large crowds in Germany have been paying their final respects to a young woman who was killed defending two girls from harassment.

Tugce Albayrak died on Friday after she was hit on the head and left in a coma outside a McDonald’s near Frankfurt.

END_OF_DOCUMENT_TOKEN_TO_BE_REPLACED

Solidarity between the Christian minority and Muslim majority is growing in Gaza as both suffer under the Israeli offensive, with churches sheltering all religions and prayers being offered up on all sides 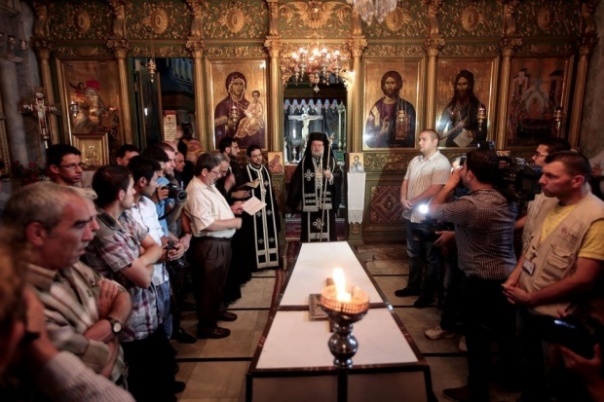 GAZA CITY – Without prior warning, an Israeli missile hit the house of the Ayyad family last Saturday. The Ayyads, who are Christian, were the first family among the tiny minority in Gaza to be targeted since the offensive began three weeks ago.

The Ayyad’s home was severely damaged. Furniture was ruined and family belongings such as children’s toys were strewn everywhere as a result of the missile’s impact. But naturally the human cost was much greater.

Jalila Ayyad was known among the people of Gaza as a woman that had nothing to do with any militia groups.  “We are a Christian minority and have no links to Hamas or Fatah – we keep to ourselves and avoid problems,” says Fouad Ayyad, Jalila’s nephew.