The Qatar women’s basketball team has forfeited a match at the Asian Games on Wednesday after being refused permission to wear the hijab.

The players were asked, in accordance with International Basketball Federation (FIBA) rules, to remove their Islamic headscarves in order to play against Mongolia.

END_OF_DOCUMENT_TOKEN_TO_BE_REPLACED

Lebanon sceptical of ‘save water’ effort

Lebanese campaign to save water amid a shortage is unlikely to work without government regulation, experts say.

Beirut, Lebanon – Plastered across billboards, flashing across television screens, and splashed on pamphlets and stickers, a new message is suddenly everywhere you look in Lebanon: “If you love me, save me some water.”

END_OF_DOCUMENT_TOKEN_TO_BE_REPLACED 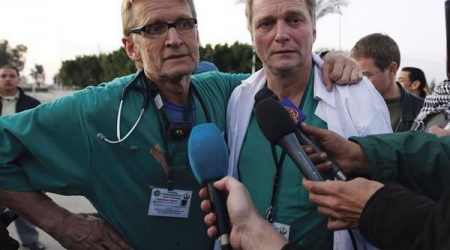 According to Al Ray Palestinian Media Agency, Dr. Erik Fosse recently stated to Press TV that the majority of patients hospitalized in Gaza are civilians injured in attacks on their homes, and that about thirty percent of these victims are children.

Dense Inert Metal Explosive, known as DIME, is an explosive device developed to minimize damage to things that are incidental to the intended target, known as “collateral damage”.

The bombs reportedly effect a relatively small but rather significantly damaging blast radius, and are believed by medical experts to have severe biological effects on those hit with the bomb’s micro-shrapnel.

DIME munitions were developed by the US Air Force, in 2006, and have since been tested repeatedly on the people of Gaza, who, according to the Electronic Intifada, have long served as involuntary lab rats for Israel’s weapons industry.

DIME bombs contain tungsten, a cancer-causing metal which helps to produce blasts which slice through flesh and bone, often completely destroying the lower limbs of people within the blast radius.

The doctor also says that some Palestinians in the besieged enclave have been wounded by a new type of weapon which even doctors with previous experience in war zones do not recognize.

Israel has used banned weapons in the past, including depleted-uranium and white phosphorus, which is nearly impossible to extiguish and leaves its victim hideously burned and scarred, should he or she even survive such an attack.

The ground assault continues in Gaza, today, with nearly 300 reported deaths and over 2,000 wounded in Gaza, to include elderly, disabled and children not even a year old — all victims of targets which include mostly civilian homes,hospitals and municipal facilities.