Kristin Szremski is a 53-year-old mom from Palo Hills, Illinois. Born into a Missouri-Synod Lutheran family, she first converted to Catholicism before finding her place in Islam. This year, Szremski was one of the hundreds of thousands of Muslims who were drawn to Mecca between October 2 – 7 to complete the fifth pillar of Islam, the Hajj.

She tells Huffington Post about her experience below. Some answers have been edited for length and clarity.

END_OF_DOCUMENT_TOKEN_TO_BE_REPLACED 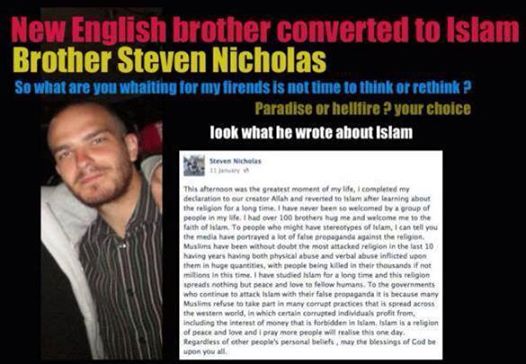 Allahu Akbar, this english brother ‘Steven Nicholas’ converted to Islam, please welcome him to the peace religion and do dua for him too. https://www.facebook.com/steven.nicholas.334

This afternoon it was the greatest moment of my life, I completed my declaration to our creator Allah and reverted to Islam after learning about the religion for a long time. I have never been so welcomed by a group of people in my life. I had over 100 brothers hug me and welcome me to the faith of Islam. To people who might have stereotypes of Islam, I can tell you the media have portrayed a lot of false propaganda against the religion. Muslims have been without doubt the most attacked religion in the last 10 having years having both physical abuse and verbal abuse inflicted upon them in huge quantities, with people being killed in their thousands if not millions in this time. I have studied Islam for a long time and this religion spreads nothing but peace and love to fellow humans. To the governments who continue to attack Islam with their false propaganda it is because many Muslims refuse to take part in many corrupt practices that is spread across the western world, in which certain corrupted individuals profit from, including the interest of money that is forbidden in Islam. Islam is a religion of peace and love and i pray more people will realise this one day. Regardless of other people’s personal beliefs, may the blessings of God be upon you all.

7 THINGS I DIDN’T EXPECT WHEN I CONVERTED TO ISLAM 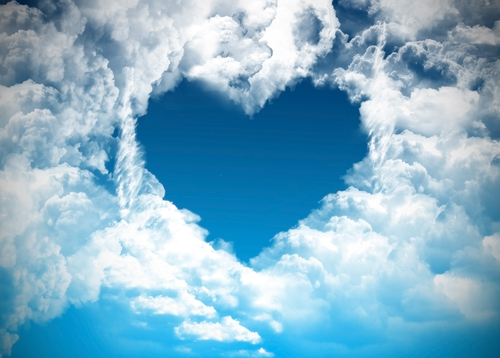 After many years of studying religion and coming to the conclusion that Islam was the only religion that made sense to my nature and who I wanted to be in the eyes of God, I converted to Islam. My life has changed drastically. And even though I took about three years to negotiate this decision and think about all the things in my life that I would leave behind and all the things I would incorporate, I had no idea how different my life would be. I had no idea… I have compiled a list of (some) things that I never expected.

END_OF_DOCUMENT_TOKEN_TO_BE_REPLACED

1. Nicolas (Bilal) Anelka
Chelsea striker Nicolas Anelka converted to Islam in 2004 in the UAE after deep discussions about religion with childhood friends, he took the Muslim name Abdul-Salam Bilal. Anelka was a Manchester City player at the time and considered moving to play his football in the UAE before settling on a move to Turkish club Fenerbache.

2. Franck (Bilal) Ribery
French player Franck Ribery is also a convert to Islam, with his wife French-Algerian wife having been raised a Muslim herself, Ribery was recently quoted as having said “I pray five times a day, I do it because it enables me to be released and I feel better afterwards.”.

3. Kolo (Habib) Toure
Arsenal centre back Kolo Toure was raised in the Ivory Coast and played for ASEC Mimosas before he was bought by the Gunners. Toure is a practicing Muslim, as are his family, and has previously stated his desire to become a role model for young British Muslims.

4. Frederick (Oumar) Kanoute
French born Malian Kanoute, who plays for Seville and the French national team as a striker, has been practising Islam since the age of 20 (he is now 32). He refused to wear the Seville shirt whilst it was sponsored by gambling website 888.com, and therefore wore a brand free version. Kanoute has also purchased a Mosque in Seville for $700k after its lease had expired.

5. Karim Benzema
Karim Benzema was born in France to parents of Algerian-Kabyle descent, and is openly a practising Muslim. Benzema currently plays for Real Madrid following a 35 million euro transfer from Lyon, he has also become a regular international player for France.

6. Samir Nasri
The young Samir Nasri has been a revelation at Arsenal and has been hailed by many in France as ‘The New Zidane’. I’m not convinced that Nasri can achieve the same things as Zidane, but he is without doubt a very talented player. Nasri was born to Algerian parents in France and raised as a Muslimm, his girlfriend is non-muslim.

7. Yaya Toure
Yaya Toure is the younger brother of Kolo Toure (number 3) and plays as a defensive midfielder for Barcelona, although he is not a first choice player very often. Like his brother, Yaya is a practising Muslim.

9. Khalid Boulahrouz
Khalid Boulahrouz is a Dutch international defender ofBerber Moroccan descent, he currently plays in Germany for Stuttgart. The Berber people are almost entirely Sunni Muslim, as is Boulahrouz and his family.

10. Abou Diaby
Abou Diaby, like the Toure brothers, is of Ivorian descent. He was raised in France, and has played for their international team. The Arsenal star, who plays as a central midfielder, remains a practising muslim.

Mutah Wassin Shabazz Beale (born October 11, 1977), better known as Napoleon, is a former member of Tupac Shakur’s rap group Outlawz. Beale has since converted to Islam and is now a Motivational speaker.