The drones came for Ayman Zawahiri on 13 January 2006, hovering over a village in Pakistan called Damadola. Ten months later, they came again for the man who would become al-Qaida’s leader, this time in Bajaur.

Eight years later, Zawahiri is still alive. Seventy-six children and 29 adults, according to reports after the two strikes, are not.

However many Americans know who Zawahiri is, far fewer are familiar with Qari Hussain. Hussain was a deputy commander of the Pakistani Taliban, a militant group aligned with al-Qaida that trained the would-be Times Square bomber, Faisal Shahzad, before his unsuccessful 2010 attack. The drones first came for Hussain years before, on 29 January 2008. Then they came on 23 June 2009, 15 January 2010, 2 October 2010 and 7 October 2010.

END_OF_DOCUMENT_TOKEN_TO_BE_REPLACED

At least 11 members of a tribe in Sierra Nevada killed when lightning struck a thatch-roofed hut they were meeting in. 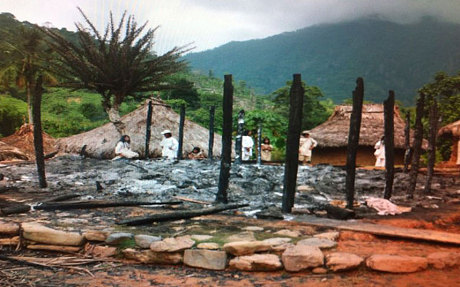 Authorities say 11 members of a remote indigenous tribe along Colombia’s Caribbean coast were killed when a lightning bolt struck a thatch-roofed hut where they were gathered.

Military officials said on Monday that another 15 members of the Wiwa tribe that live high in the coastal Sierra Nevada range were injured with burns, six of them seriously.

END_OF_DOCUMENT_TOKEN_TO_BE_REPLACED

Mark Dice is a media analyst, author, and political activist who, in an entertaining and educational way, gets people to question our celebrity obsessed culture and the role the mainstream media and elite secret societies play in shaping our lives.

In 2013 James Foley was confirmed to be held by the Assad regime, in 2014 he was held by #ISIS and beheaded

In 2013, James Foley was confirmed to be held by the Assad regime. In 2014, he was held by #ISIS and beheaded. Kinda fishy right? Still don’t get how any rational human being doesn’t see all the red flags. #FreeSyria

The last few weeks in Europe, Canada and the USA have only confirmed to me the blessing of pious Muslim women! Brothers if you have a good relationship with a practising Muslim woman, don’t ever break that bond: not for the sake of beauty, money or position!!!” Sisters: ‘Don’t ever let a man put you down or take you off the path to Allah!” May Almighty Allah enable us to strengthen our families, preserve our marriages and protect our children.

Israel and the Palestinian factions, including Gaza’s Hamas movement, have accepted an Egyptian proposal to cease fire from 0500 GMT on August 5 for at least three days. Osama Hamdan, a senior Hamas leader, and Mark Regev, a spokesman for the Israeli prime minister, confirmed the deal to Al Jazeera, with officials from each side pledging to commit to the truce and warning the other against violating it.

The top doctor treating patients infected with the Ebola virus in Sierra Leone has died from the disease, officials have confirmed. Dr Sheik Umar Khan had been hospitalised in quarantine since he contracted the virus last week. The virologist was credited with treating more than 100 patients at the hospital in Kenema – one of the world’s leading Ebola diagnosis facilities.

“It is a big and irreparable loss to Sierra Leone as he was the only specialist the country had in viral haemorrhagic fevers,” Kargbo said on Tuesday.

The current outbreak is the largest in history, so far killing more than 672 people across West Africa since the outbreak began in February, according to the World Health Organisation (WHO). Nations affected include Sierra Leone, Liberia, Guinea and Nigeria.

Dr Khan’s death on Tuesday afternoon was confirmed by chief medical officer Dr Brima Kargbo, who had previously hailed him as a “national hero” when she announced he had contracted the the disease.