A scholar of Hadeeth and Fiqh and the renowned Imam of the Madinah.

Abu Abdullah, Malik ibn Anas ibn Malik ibn Amer al-Asbahee was born in
Madinah in the year 93 AH (714 CE). His ancestral home was in Yemen, but his
grandfather settled in Madinah after embracing Islam.

Malik became the Imam of the Madinah, and one of the most renowned Imams of
Islam.

He received his education in what was the most important seat of Islamic learning,
Madinah, and where lived the immediate descendants and the followers of the
companions of the Prophet, sallallahu alayhi wasallam, were living.

END_OF_DOCUMENT_TOKEN_TO_BE_REPLACED

Mahatma Gandhi about Prophet Muhammad (peace be upon him) (Video)

Non-Muslim views about Prophet Muhammad (peace be upon him)

The greatest individual in history (peace be upon him) 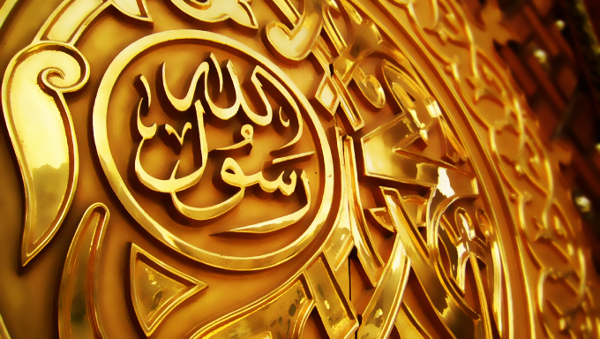 BISMILLAHIR RAHMANIR RAHEEM (In the name of Allah, Most Gracious, Most Merciful)

Below is a fascinating narrative taken from Saiyid Sulaiman Nadwi’s book, “Muhammad, The Ideal Prophet: A Historic, Practical, Perfect Model for Humanity” (translated by Mohiuddin Ahmad). This book is a compilation of a series of lectures given in India in 1925 and it goes a long way in accentuating the fact that Prophet Muhammad(Sallallāhu ‘alayhi wasallam) alone is the symbol of perfection and a paradigm of virtuous and wholesome behavior.

END_OF_DOCUMENT_TOKEN_TO_BE_REPLACED

A Brief Biography of Prophet Muhammad

START OF HIS MISSION

RESONANCE OF HIS CALL

‘NEUTRALISE THE MESSENGER AND HIS MESSAGE’

MIGRATION OF THE MESSENGER OF ALLAH

MESSENGER OF ALLAH ARRIVES AT MEDINA

Muhammad was born in the city of Mecca , in Arabia , on a Friday, the 17th day of the lunar month of Rabi‘-I, in the year 570CE into a noble family whose fathers and ancestors were amongst the chiefs of the Quraysh tribe, and the Bani-Hashim clan.

His Prophetic mission began in the year 610CE on the 27th day of the month of Rajab, when he first received the divine revelation.  Then the Qur’an was revealed to the Prophet progressively according to the circumstances of the time over a period of 23 years.

The Prophet Muhammad was killed by poisoning on the 28th day of the month of Safar in the 11th year of the Hijrah[1], 630CE.

Muhammad’s father Abdullah son of Abdul-Muttalib was the best and most pious among the sons of Abdul-Muttalib and his most beloved. Abdullah died while Muhammad was still in his mother’s womb. All that he left behind were five camels and a servant girl named Barakah, also known as Omm Ayman, who was Muhammad’s nanny. Abdullah was a true believer and a monotheist.

After Abdullah’s death, Muhammad’s grandfather, Abdul-Muttalib, became his guardian. Abdul-Muttalib was one of the chieftains of the tribe of Quraysh, and a believer in Allah [in the way of Prophet Abraham], as was Abu Talib, a brother of Abdullah. Abdul-Muttalib always respected and honoured treaties and adopted the finest of morals. He loved the poor and helped pilgrims. He would even feed the wild beasts and the birds of the mountaintops. He would feed people in times of famine and would restrain wrongdoers.

Muhammad’s mother was Aamenah daughter of Wahab son of Abd Manaf son of Kilab. She was also a believer in Allah.

When Muhammad was born his mother said: ‘As soon as I put my child on the ground he leaned with his hands on the ground, raised his head to the skies and looked at the horizons all the while speaking in phrases of monotheism. Then a voice called out to me saying: ‘The best of mankind has been born so name him Muhammad.’

Then Aamenah sent for Abdul-Muttalib. He came to her and she said: ‘A wondrous boy has been born to you.’ Then she brought baby Muhammad to him. Abdul-Muttalib looked at him then took him and entered the Ka‘bah[2] and prayed to Allah. Then he left the Ka‘bah and returned him to his mother and named him Muhammad.

Muhammad was not yet seven years old when his mother died. After his mother’s death, his grandfather Abdul-Muttalib assumed guardianship of him. Because of his knowledge of the status of the child and his faith in him he treated Muhammad with more care and attention than his other children. A group of the Medlaj Clan came to Mecca and when they saw Muhammad they said to his grandfather: ‘Take good care of him for we have never seen another of his station.’

Abdul-Muttalib said to Abu Talib in his will to heed what they say and take care of him.  Muhammad was eight when his grandfather died, and he was taken into the care of his uncle Abu Talib.

Abu Talib, chief of the Bani-Hashim clan within the Quraysh[3], then became the guardian of Muhammad from his eighth year. Abu Talib went on to protect and serve the Messenger of Allah, defending him and honouring him throughout the testing times of his Prophethood, until the last breath of his life.

Muhammad grew up to become a fine young man.  He became known for his excellent manners, and because of the honesty in his conduct and dealings he was referred to as al-Saadiq (The Truthful One) and al-Amin (The Trustworthy One).

As a youngster Muhammad used to accompany his uncle on his business trips to Syria .  When the Messenger of Allah reached the age of twelve he journeyed with his uncle Abu Talib as far as Busra. There he was seen by a Christian monk named Georges who recognised him by his description. He took his hand and said: ‘This is the chief of the Worlds, God will send him as a mercy to the Worlds.’ Abu Talib said: ‘How do you know this?’ He said: ‘We find mention of him in our books.’ He asked Abu Talib to take him back fearing for his safety.

As an adult, Muhammad worked as a trader between the cities of Mecca and Damascus , and earned a great reputation in the process.  Having heard of the reputation of Muhammad, Lady Khadijah, one of the noblest of the Quraysh, on one occasion commissioned him to take charge of some of her trading business between the two cities.  Lady Khadijah sent one of her servants, Maysarah, along with him to keep an eye on him and report back to her.  Having seen his performance in the business, and the returns he had produced as well as his honesty, Lady Khadijah put Muhammad in charge of her business.  Although she had many proposals of marriage from various dignitaries of the Quraysh, Lady Khadijah declined them all. It is reported that it was Lady Khadijah who, albeit indirectly and discreetly, made the marriage proposal to Muhammad. Some historians have reported that when they married in 595CE they were both 25.

Lady Khadijah gave birth to three children. All of the Prophet’s children were from Khadijah except Ibrahim who was from Mary the Copt, who was born in Medina and lived for a year and ten months. The male children who were all born in Mecca were; al-Qasim which is where Muhammad’s epithet (Abul-Qasim; meaning Qasim’s father) comes from, and Abdullah.   The boys all died young during the lifetime of the Prophet.  His only daughter was Fatimah, who married Imam Ali son of Abu Talib, and bore him Imam Hasan and Imam Husayn, Zaynab and Omm Kolthuom, and another son who was named Mohassen by the Prophet before his birth. Fatimah was the only one of the siblings to survive the Messenger of Allah.  The Prophet Muhammad used to say Hasan and Husayn are two Imams (leaders) whether they rise up (against tyranny) or not.

Ali was born to Abu Talib and his wife Fatimah bint Assad in 600CE.  Ali’s birth was associated with a particularly significant phenomenon.  When Fatimah bint Assad was in labour she came to the Ka‘bah pleading to God for help with her labour.  It is reported by various narrators and recorded by many chroniclers that as she was engaged in her prayers by the southern wall of the Ka‘bah, the wall split open and she entered the House, whereby the wall returned to its normal state.  Having observed this extraordinary phenomenon, people who were present tried to follow her into the House through the opening but did not succeed.  They then tried to go inside the House through its door but could not unlock the door.  Reports indicate that she was inside the House for three days, and when she left the House with her newborn she did so in the same manner as she entered the House.

Start of His Mission

The Prophet Muhammad used to spend much time in prayer and worship of the one God.  This he used to do in a cave, known as Hira, in the al-Noor mountain near the city of Mecca .

END_OF_DOCUMENT_TOKEN_TO_BE_REPLACED

The Life of the Last Prophet (AUDIO)