Bilal Philips – Extremism is not the way (Video)

Dr. Bilal Philips – The Value of Time and The Dangers of Procrastination (Video)

Dr. Bilal Philips – Can Muslims take a loan to buy a house in the west? (Video) 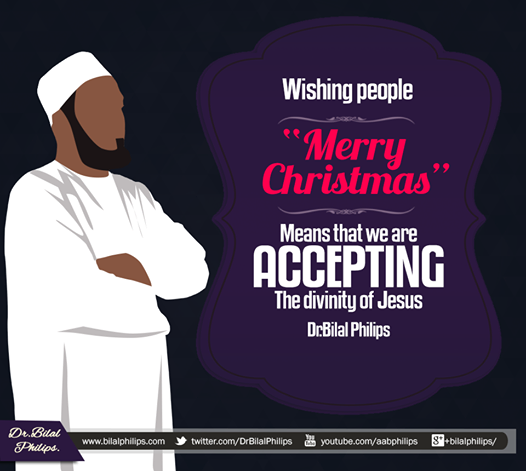 It is not permissible for a Muslim to greet Christians with the traditional Christmas greeting because it means celebrating the day of “God’s” birth – a concept absolutely abhorrent to Muslims and in direct contradiction to the Qur’aanic verse, “He (Allah) did not give birth nor was He born.” (Qur’an 112:3)
The date of birth of Prophet Jesus, like that of Prophet Muhammad (peace be upon them both) was unknown and it was chosen to match the Saturnalia, the festival of the harvest dedicated to the Roman god of the harvest, Saturn. Christians did not celebrate the birth of Christ for the first 3 centuries after Jesus’ departure because birthday celebration was a known pagan practice. Similarly, Muslims did not celebrate Prophet Muhammad’s birthday until 4 centuries after his death. The practice was started on a state scale by the Fatimid Shi’ite caliphate in Egypt and the date of the Prophet’s death was chosen for the celebration. Dr Bilal

Dr. Bilal Philips: Boyfriend Girlfriend what is the solution (Video)

Interesting statistics of Muslim Population and Prevalance of Aids in Africa

Interesting statistics which clearly back up an argument I have used in lectures defending Islam’s strong stance against extra-marital sex. The best prevention for HIV is sex only within marriage and abstinence for the unmarried.