There has been a recent hash out of an old debate about whether Australia should ban Muslim women from observing Islamic practices of face veiling. The burqa, a head-to-toe whole body covering, has elicited calls for an outright ban in public places.

END_OF_DOCUMENT_TOKEN_TO_BE_REPLACED

WISH – Women In Solidarity with Hijabis

Stand in solidarity with Australian Muslim women by posting your photo donning a hijab with the hashtag #WISH Women in Solidarity with Hijabis.

END_OF_DOCUMENT_TOKEN_TO_BE_REPLACED

Australia: Christian and Jewish leaders rally in support of Muslims 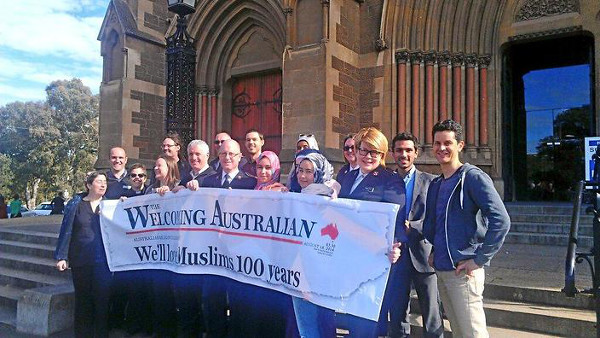 Christian and Jewish leaders have rallied to support the Muslim community, asking members of the Australian public to join them in a campaign called “We’ll love Muslims 100 years”.

END_OF_DOCUMENT_TOKEN_TO_BE_REPLACED

The Australian government continues to break the law with its actions against asylum seekers. 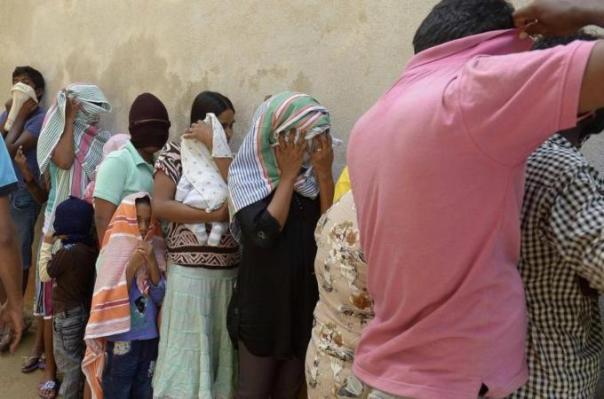 As Australia’s conservative federal government falls further in opinion polls, it is increasingly willing to eschew international refugee conventions to cling to the one thing that is winning it support – the illegal and inhumane treatment of asylum seekers.

While the Australian government’s treatment of child refugees and its refusal to release details of asylum seeker boat arrivals and block attempts by journalists to investigate detention facilities earn it little praise internationally, at home it is one of the few things winning the government any favour.

END_OF_DOCUMENT_TOKEN_TO_BE_REPLACED 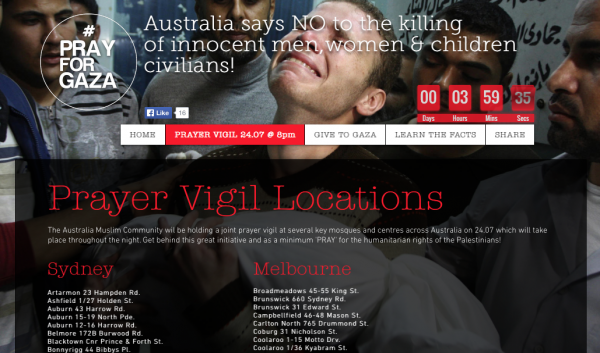 Australia’s Muslim community is outraged at Israel’s mass murder of civilians in Gaza.

United in their grief and concern for the escalating conflict in Gaza, Muslim communities across Australia will hold a Prayer Vigil at 8pm tonight as they gather at mosques. It is expected that approximately 150,000 people across the country will join the Prayer Vigil.

The community is deeply disturbed by the Australian government’s silence. Sixteen days on and the international community, including Australia, remains largely silent as the Israeli army continues its deadly assault on Gaza. Over 650 innocent women, children and men have been killed in just 16 days. Entire families have been wiped out, hospitals bombed, and homes and suburbs destroyed. Indeed, the United Nations High Commissioner for Human Rights yesterday expressed the view that Israel may be guilty of war crimes.

Australia’s Muslim community condemns in the strongest possible terms the gross and disproportionate military assault by Israel– a military juggernaut and covert nuclear state– against the Palestinian people it occupies, besieges and controls. More than 1.5 million Palestinians are crammed into 140 square miles, the most densely populated area in the world. Israel controls Gaza’s airspace, waters and borders and has imposed a crippling blockade over Gaza.

The community repudiates Israel’s claims to be acting in self defence. “It is sinister propaganda to suggest that Israel is acting in self-defence when it is raining down tonnes of bombs on a besieged, impoverished, defenceless population who, because of Israel’s blockade, are unable to even escape or flee,” says Randa Abdel-Fattah of PrayforGaza.

• the Australian government to use its position at the UN Security Council to condemn Israel’s aggression and call upon Israel to put an end to their offensive, to acknowledge the oppression that the Palestinians endure, and to call for the blockade of Gaza to be lifted so that aid supplies can reach the Palestinian people;

• the wider Australian community to lobby local government to take a position against Israel’s crimes against humanity and join the growing body of individuals and institutions who support the global Boycott Divestment Sanctions (BDS) movement;

• the international community to condemn the actions of Israel, call for an end to the airstrikes and incursions and prevent any further military action from taking place;

• the United Nations to call out the human rights violations being committed against the Palestinians and implement sanctions against Israel;

• media outlets to provide fair and objective reporting, to cease distorting coverage of Israel’s atrocities and to give Palestinians the dignity of having their plight reported truthfully.

Australia’s Muslim Community urges the Australian government to stop being on the wrong side of history and to join the overwhelming majority of the world in recognizing all Palestinian Territories as occupied and all Israeli settlements as illegal.

Statement on behalf of:

Office of The Mufti of Australia

END_OF_DOCUMENT_TOKEN_TO_BE_REPLACED

Many Young Australians are now converting to Islam (Video)

An increasing number of young Australian men and women are now crossing over and converting to Islam. Now, A Current Affair takes you inside the family homes where everything is changing.
More video’s…