Why You should NEVER Shake a Child (Video)

Please share this valuable information that could save a child from brain damage or even dead. The Prophet Muhammad (peace and blessings be upon him) taught his companions never hit the face or head of children or even adults. Many parents are not aware of the serious dangers linked with shaking a baby or young child. Abusive head trauma (AHT) can not only be caused by hitting the child on the head but also by shaking. Today there is a common problem across the world known as Abusive head trauma (AHT) that can be caused by direct blows to the head, dropping or throwing a child, or shaking a child.

The number of Muslim children in several British cities is fast eclipsing that of Christian children, according to birth rate statistics that reveal the country’s significant demographic change. The Daily Mail reports that the latest statistics, extracted from the 2011 Census, shows that of 278,623 young people in Britain’s second largest city, Birmingham, 97,099 registered as Muslim compared to 93,828 as Christian. Meanwhile in Bradford 52,135 children, forming 45 percent of the total, are Muslim, compared to 47,144 Christians. Leicester has 22,693 young Muslims compared to 18,190 Christian children. The London borough of Tower Hamlets has the biggest difference, with 62 percent of children being raised Muslim. Christians in the borough are significantly outnumbered by 34,597 to just 8,995. 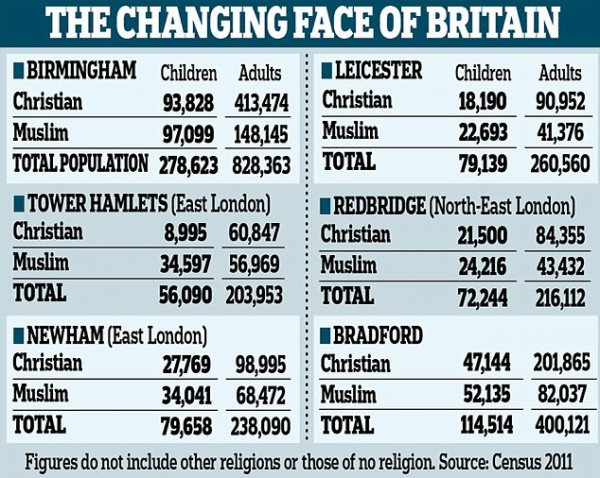 Sughra Ahmed, president of the Islamic Society of Britain, told the Daily Mail that those numbers are likely to grow.