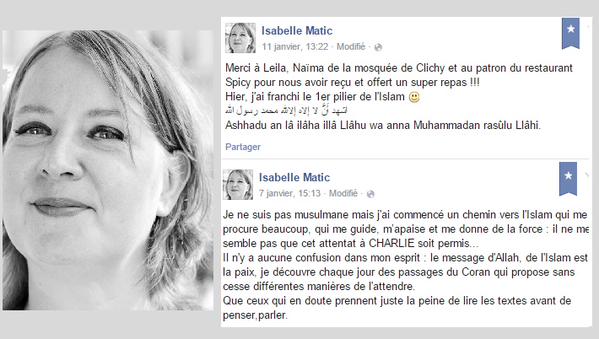 Rabat – French director Isabelle Matic announced on her Facebook page on January 11 that she converted to Islam, only a few days after Charlie Hebdo Paris attacks.

“Today, I passed through the first pillar of Islam,” she wrote on her Facebook page.

“I testify that there is no god but Allah, and that Muhammad is His messenger,” she added.

After her announcement, Matic posted on Facebook more statements explaining her conversion to Islam. Following the “massacre of Charlie Hebdo” and other event that have targeted France, the French director announced that she became a Muslim.

The French director thanked Moroccan actor Hicham Bahloul for announcing her decision on his Facebook page, which was the exclusive source where Moroccan media obtained the information.

With regard to her position towards the caricatures of the Prophet, Matic said that she is still for freedom of expression for all, and Charlie Hebdo in particular.

“I will write you the text of the SMS that I received this morning from a mosque which agreed quite well with my thoughts since the beginning of the cartoons, well before I became a Muslim,” she wrote on her page on Wednesday at 12:48. “They are making fun of Muhammad and do not harm him. They are making fun of a character that they have imagined and to whom they have given a name. This man is not our Prophet,” she added.