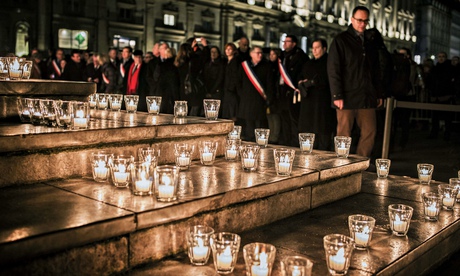 The killing of journalists in Paris on Wednesday was not only an attack on France but also an assault on Islam and the very freedoms that allow 30 million Muslims to prosper in the west.

Free speech is not a western concept: it is a universal craving of the human soul. The gunmen ran away shouting that they were “avenging the prophet Muhammad”. How dare they? We cannot let the murderers define Islam.

In sixth-century Mecca, it was the prophet Muhammad who fought for free speech to proclaim one God as the creator of life and worthy of worship. The city’s pagans were his violent persecutors.

Today Muslims live freely in every European country because of the very freedoms that the terrorists struck at. Without the freedom to blaspheme and believe, Muslims would be seen as heretics and would be unable to flourish as faith communities in the west. The pogroms and wars of religion in Europe’s history bear testament to European life without freedom.

Islam and Muslims are secure in the west because of freedom of speech, conscience, press and religion. To attack those freedoms is to attack Islam’s existence. The dangerous ignorance of the extremists is not limited to their failure to understand the west. They do not know the prophet for whom they claim to kill.

Unable to observe Islam freely in Mecca, the prophet migrated to Medina. There his first act was to build a mosque, the most sacred structure for a believer. An Arab man entered the mosque and urinated in front of the prophet with no care for the sanctity of the mosque. How did the prophet respond to this deepest of insults to Islam and himself? He cleaned the mosque, stopped Muslims from expelling the man and explained the inviolability of a place of worship.

There are many such lessons of compassion, kindness and care in the life of the prophet that are airbrushed by today’s fanatics. The bigotry of the Salafi jihadis can only be challenged and eventually uprooted by educating them on the prophet of Islam described in the Qur’an “as a mercy to the worlds”.

Many in the world today would be rightly asking “where is this mercy?” For what we see is beheadings, wars and suicide bombings in the name of religion. Sadly, we will continue to witness such evil unless we address the motivations of the Salafi jihadist killers. They kill in the name of religion; we cannot respond by citing the virtues of Darwin, secularism and materialism. The only language these radicals understand is that of religion. It is by mustering the best of religion that we defeat the worst of it.

The murders in Paris are not an isolated incident but part of a global trend of young Muslims disenchanted with the modern world, finding consolation in the theology and ideology of literalist sharia, killing, vengeance, punishment, domination and imposing their worldview as state law. Al-Qaida, Isis, Somalia’s al-Shabaab and others are only manifestations of this mindset.

There is a raging battle of ideas within Islam across the world today. The extremism, terrorism and sectarian warfare is an overspill of this intra-faith theological conflict. The vast majority of the victims of terrorists are Muslims because the intolerance of the zealot targets fellow Muslims first. In Pakistan alone, more than 40,000 Muslims have lost their lives to terrorism since 2001. The violence reaches the west only occasionally.

When the attacks of 9/11 shook the United States, American Muslims rallied around their government, mosques flew the stars and stripes, and the American president visited a mosque from which to say Islam and Muslims stood beside America. In Britain the government, media and Muslim citizens used the language of religion to delegitimise violence.

France has excellent relations with Muslim nations including Morocco, Algeria, Tunisia – and millions of French Muslims who could help marshal the language of religion to isolate and defeat Salafi extremists by countering their arguments.

This is a battle of messages and counter-messages – the jihadis call for a caliphate, intolerance, death and wanton destruction. We call for life, pluralism, openness and freedom of religion, conscience and security.

The sharia has higher aims that are fully in line with the modern world. Radicals are in urgent need of re-education on Islam. We have the weight of 1,400 years of Muslim history behind us, the vast majority of Muslim scholars and the bulk of the global Muslim population.

The prominent French-speaking Muslim theologian Shaikh Abdullah bin Bayyah often says that if there is a house on fire, everybody works towards putting out the fire. You don’t ask why is this or that person carrying the bucket of water. The house of Islam is on fire. The water needs to be carried by everybody, regardless of race or religion.