← Documentary: The Global Challenge of Ocean Acidification (Video)
Islam stands for justice and not revenge → 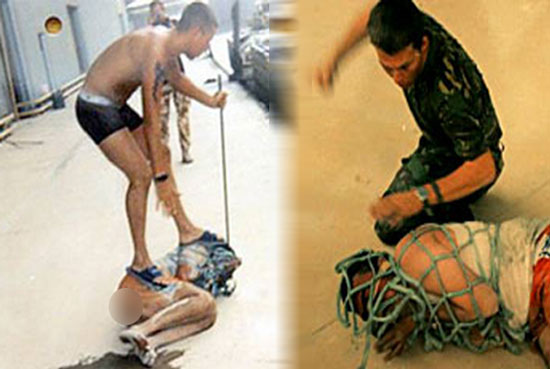 The court papers, passed to The Rendition Project by the legal action charity Reprieve, describe British abuse of this prisoner in detail. Shockingly, this evidence documents how British forces in Iraq waterboarded Rahmatullah multiple times, until he lost consciousness, as part of a regime of sustained abuse meted out to the prisoner.

The use of torture by UK personnel is alleged to have taken place in Camp Nama, a highly-secretive site at Baghdad International Airport which was staffed by, among others, personnel from the CIA and the elite Special Forces unit Joint Special Operations Command, operating under the assumption that “If you don’t make them bleed, they can’t prosecute for it.” Up until now, reports have suggested only that UK military units helped with guard and transport duties at Camp Nama, and witnessed the torture conducted by their US counterparts.

According to British former members of the joint US-UK Task Force 121, the elite unit responsible for capturing high-value suspects in Iraq and delivering them to Camp Nama, prisoners were held in cells the size of dog kennels, subjected to electric shocks, and taken into a sound-proofed shipping container for further torture and interrogation by US personnel.

The fact that the UK was involved in running a torture center in the heart of Baghdad is shocking enough. But the case of Rahmatullah shows that the role of British forces in detainee abuse was far more serious than acting simply as a bystander. From the moment that Rahmatullah was captured by the joint UK-US special forces task force, alongside his business partner Amantullah Ali, both men were severely mistreated by UK personnel. Throughout the initial period of capture and transport to Camp Nama, Rahmatullah was repeatedly beaten until he lost consciousness, and thrown into the back of a truck with what he believed to be dead bodies.

Once at Camp Nama, Rahmatullah was subjected to a horrific regime of abuse, with British personnel apparently playing a lead role. After being threatened with death, he was tied to the back of a truck and dragged around the base, before being thrown into a pen with large dogs. The dogs were allowed to attack him for around 20 minutes before being chained just out of reach, so that Rahmatullah had to stay very still. Kept like this for hours, soldiers would enter at times to beat him.

After his ordeal with the dogs, Rahmatullah was held, naked, in a number of extremely small cells between interrogation sessions. One was just 1m x 1m, where his hands were chained above his head and he was beaten if he moved his head. Soldiers drenched him with cold water and turned on air-conditioning until he became very cold. He was not taken to a bathroom, and was left to urinate and defecate himself. At one point, Rahmatullah was moved to another cell, which was larger but had 5-6 other prisoners, all naked. At another point, he was held in an “enclosed chamber,” little more than a coffin, just 40cm high.

Interrogation sessions were led by men who identified themselves as British. During the questioning, he was repeatedly beaten until he bled. After losing consciousness in one session, he was woken by having his head smashed against the wall. At another point, Rahmatullah was subjected to a textbook description of waterboarding: he was tilted backwards and had a cloth placed over his mouth and nose. Water was then poured onto his face through the cloth, causing him to experience a sensation of drowning and panic. Rahmatullah was waterboarded multiple times until, eventually, he lost consciousness.

With the UK forces evidently finished with Rahmatullah, they handed him over to the US, who took him to the notorious Abu Ghraib prison before being illegally and secretly transferred out of Iraq. US personnel confirmed to Rahmatullah that he had been held by the British for the period after capture. For the next ten years, he was held, without charge or trial, and without access to lawyers, at the US prison in Bagram, Afghanistan, until his eventual release in June 2014.

The story of Rahmatullah is harrowing enough. However, equally disturbing in some respects has been the response by the British state when faced with a small group of lawyers and politicians who have striven to expose what happened. Official obstruction and misinformation has been the order of the day. National security exemptions in the Freedom of Information Act have been used to stop official records from being released. Parliament has been provided with misleadinginformation. The UK Government has embarked upon a concerted effort to halt any legal proceedings, arguing that revelations in court of his mistreatment would damage UK-US relations.

In spite of these official evasions, those working on behalf of Rahmatullah have recently gained some ground in their attempt to hold the British state to account. In a ruling in November 2014 that gave Rahmatullah the right to sue the UK for damages, Justice Leggatt stated that it would be an “abdication of […] constitutional function” for the UK High Court to “refuse to decide a case involving a matter of legal right on the ground that vindicating the right would be harmful to state interests.” In other words, the argument that hearing the case would cause damage to UK-US relations should not be allowed to stand. The Government, perhaps unsurprisingly, is considering an appeal.

In response to the ruling, Kat Craig, Rahmatullah’s lawyer and Legal Director at Reprieve, stated that the judgment demonstrates that “justice demands that Yunus, like other victims of the ‘war on terror,’ will have his day in court. What we are seeing now is an attempt by the UK Government to continue silencing Yunus” in order to prevent “his horrifying story from seeing the light of day.”

As more evidence leaks out about the actions of UK forces during the “War on Terror,” claims that the UK government was “appalled” by the use of techniques such as waterboarding ring increasingly more hollow. As happened throughout the last century, in conflicts from Kenya to Northern Ireland, the UK has engaged in abuse and torture during the “War on Terror” whilst, simultaneously, maintaining that its actions are driven by the ideals of democracy and human rights.

And in another echo of past endeavors, the British Government is now deploying a concerted campaign to prevent the truth coming to light. It is only through dogged investigative determination, and a refusal to let history lie, that we will eventually come to understand the truth of what has happened in our name.

← Documentary: The Global Challenge of Ocean Acidification (Video)
Islam stands for justice and not revenge →