← Scientific Facts in the Qur’an – SKY’S PROTECTION (Video)
Prophet Muhammad (pbuh) said: “By his good character a believer will attain the degree of one who prays during the night and fasts during the day.” → 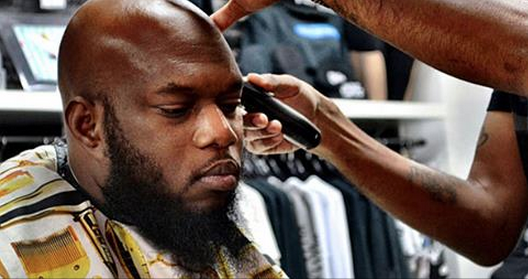 Philly rapper Freeway has invested in a product close to his roots, literally.

The 36-year-old rapper has debuted his contribution to manscaping with the release of his All Natural Best Beard cream.

Packaged in silver tins, the handcrafted creams come in an assortment of scents, from sweet blueberry to the limited-edition holiday spice that smells like nutmeg.

As of late, men have been saying so long to the chin strap, the goatee, and the soul patch as more have been growing full-on thick beards of glory.

Donning a “Beards R Us” T-shirt as he peruses the apparel in Status Shop on South Street, Freeway has been a source of beard-spiration since he exploded onto the hip-hop scene in the early 2000s.

“I’ve always been known throughout the music industry for my beard,” said Freeway, 36.

Whether tailored like Ice Cube’s or Abe Lincoln-esque like Ohio rapper Stalley, the beard has become a muscle that one must flex often.

But Freeway, who is Muslim, keeps his beard for religious reasons and hasn’t cut it since it sprouted. And though he’s used natural oils, shea butter, and different beard products, he “was always trying to find something good” for his beard.

After trying a homemade beard cream, he was inspired to develop a line of his own. Freeway teamed up with longtime business partners and bearded brethren Gary Parker and Jason Hertzog. Hertzog, who says he’s “crazy in the kitchen,” became the chemist behind the cream.

It took Herzog a few months to perfect the recipe of raw shea butter, raw mango butter, raw beeswax, and a mix of natural organic oils, But once completed, Freeway says, “it was just as good as the other stuff I was using, if not better.”

Hertzog says he uses all-local and all-natural ingredients, attributes important to Freeway, who says he once tried a beard cream that made his beard look scraggly.

“There are a lot of products out there and a lot of them have a ton of chemicals; you can’t even pronounce half the stuff that’s in it,” said Hertzog. “I don’t like that feeling. For me, it just turns me off of a product.”

After a year was spent perfecting the formula, consistency, labeling, and packaging, now “we can’t make it fast enough,” Parker says. The cream is sold locally at Mecca Unisex Salon in North Philadelphia and Status Shop on South Street, as well as online. The pocket size is $5 for a half-ounce; a 2.5-ounce can sells for $13.95.

It also is distributed to several barbershops nationwide, but Philadelphia proves to be the perfect market with its large Muslim population.

The city’s hipster population has also contributed to the beard lovin’, but, Parker says, “It’s more than a fad; it’s a lifestyle.”

The trio may have its finger on the pulse of a growing trend. Not only are more men growing their beards, but more are active – even fanatical – about maintaining them. Men no longer have to rummage through their girlfriends’ Bath & Body Works products for something to condition their beard. According to Retail Gazette, the popularity of beards – sometimes called “the beard effect” – is one of the factors leading to the decline in razor sales. Procter & Gamble, owner of Gillette, reported a 10 percent drop in sales of Schick razors last year.

“Not only do we want to give people beard cream,” said Parker, “we want to boost their self-confidence.”

“The feedback we get from the girls is always a plus,” said Hertzog.

During a photo shoot, model Alfredo Aviles, 21, rubs the new blueberry cream between his hands, as his girlfriend watches. He generously applies the cream and says he likes it.

“If she’s rubbing up on me, she’ll have the subtle scent of blueberry,” said Aviles. “Every time she sees blueberries, she’ll think of me.”

The men say not only do they want each scent to appeal, but they also pride themselves on the cream being both multipurpose and multiethnic.

A barber for more than 20 years, André “Chink Da Barber” Scott says he’s been using the beard cream for almost two months. “Before I sell it to my clients,” said Scott, “I use it.”

He says beard cream is essential for replenishing the oils stripped from hair, and can even help with dry scalp. Scott begins to conduct a demonstration on how to apply the cream, rubbing a dab between his palms and gently applying from root to tip. As he runs the blow-dryer through Freeway’s beard, the aroma of blueberry begins to take over the shop.

With sales of more than 1,200 beard creams since their launch in August, and a sellout of their holiday spice, word clearly is spreading. They say they have received orders worldwide, including from the United Kingdom and Nigeria.

Whether you wear your beard for style, the ladies, or your religion, Parker says, “this beard cream is for the people.”

← Scientific Facts in the Qur’an – SKY’S PROTECTION (Video)
Prophet Muhammad (pbuh) said: “By his good character a believer will attain the degree of one who prays during the night and fasts during the day.” →