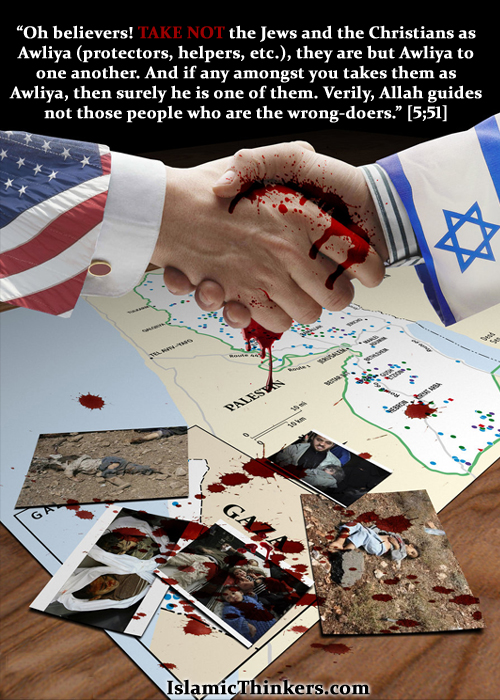 The Muslim is required to be aware, and learn about the plots and tricks of his enemy. Allah (subhaanahu wa-ta’aalaa) says in the Qur’aan:

Surely, Shaytaan [Satan] is an enemy to you, so treat him as an enemy. He only invites his hizb [followers] that they may become the dwellers of the blazing Fire. (EMQ Faatir, 35:6) This verse clearly informs us of who our enemy is: Shaytaan (the devil). Allah (SWT) strictly orders us to treat our enemy as our enemy – not as a friend or ally. Consequently, it is not allowed for a believer to have any sympathy, love, affection, compassion or respect for his enemy. Allah (SWT) says:

O you who believe! Take not my enemies [the disbelievers] and your enemies as awliyaa’ [friends, allies, supporters, assistants etc.], showing affection towards them… (EMQ al-Mumtahanah, 60:1)

Moreover, Shaytaan (the enemy of Allah) can take two different forms. He can either be in the form of a jinn, or in the form of a human (EMQ 114:6). When the Shaytaan is in his jinni form it is very difficult for a person to combat him, unless of course he is a true believer and a Muwahhid (monotheist). However, when he is in his human shape (i.e. in the form of a Kaafir) it is much easier to recognise him and defend himself from the attacks of Shaytaan. Allah (SWT) says:

…Verily, the Kaafireen [disbelievers] are ever unto you your open enemies. (EMQ an-Nisaa’, 4:101)

Based upon the above verse, taking the disbelievers as one’s enemies is a condition of being a Muslim. This is because they are utterly despised by Almighty Allah (SWT) and hence, we must despise them too – even if it is illegal to do so. Allah (SWT) says:

Nowadays, if a person is asked, “Would you take a Shaytaan as your friend, vote for him or join his police?” He will most definitely reply, “No.” However, if a person is asked the same question, but the word Shaytaan is replaced with “Kaafir”, his reply would most probably be, “Yes of course! It is a duty upon me to do so”, even though this statement is kufr (un-Islamic) and there is absolutely no difference between a Shaytaan and a Kaafir.

Likewise, many people believe that it is an act of apostasy to become a mufti (scholar) of Shaytaan. But when the word Shaytaan is replaced by Taaghout, it becomes allowed – even though Taaghout is just another word for Shaytaan. May Allah (SWT) protect the believers from such nifaaq (hypocrisy).

Furthermore, in Islam there are no such concepts as “love your enemy” (as indicated in the above verse quoted from chapter al-Faatir, 35:6), or “blood is thicker than water”; therefore, our love to one-another is based upon Eemaan – not on blood, race or nationalistic relations. Thus, it is not allowed to even ally with one’s brother or father if he is upon falsehood or prefers kufr (disbelief) over eemaan. Allah (SWT) says:

O you who believe! Take not for awliyaa’ [supporters, friends, allies and helpers] your fathers and your brothers if they prefer disbelief to Belief. And whoever of you does so, then he is one of the zaalimoon [wrong-doers, oppressors etc.]. (EMQ at-Tawbah, 9:23)

The consequence of taking Shaytaan (or a disbeliever) as your ally or friend is quite severe in Islam. In fact, the Sharee’ah considers it to be an act of riddah (apostasy), and this is why the Messenger Muhammad (SAW) and his Companions were very swift in dealing with those who allied with the Mushrikeen (non-Muslims).

However, just because the disbelievers are our enemies it does not necessarily mean that we must fight them. When Allah (SWT) describes the non-Muslims as His and our enemies, it is in order to warn us not to follow, imitate, support or like them. The disbelievers are “the Companions of the Fire”, and they have earned the anger and curse of Allah (SWT); hence, this is why we ask Allah over seventeen times a day (in al-Faatihah during our prayers) not to make us like them.

In the 21st Century Crusade against Islam and Muslims, the enemies of Allah are now attempting to force the believers into loving them and their evil ideology by making new legislations that will prevent Muslims from fulfilling their obligations and “inciting religious hatred”. Furthermore, they also want to put a stop to Muslims praising or “glorifying” certain individuals who have given the enemy “a bloody nose”. This is because – despite their “sophisticated technology” and wealth – they have miserably failed to defeat a handful or people who have none other than Allah as their Mawlaa (Supporter).

If a Muslim is no longer able to fulfil his duty of al-Walaa’ wal-Baraa’ (loving the believers and hating the disbelievers), he must migrate (make hijrah) to a land where he is able to do so.