← The myth of Islamic terrorism in Europe & USA
Are Arabs Superior in Islam? (Video) → 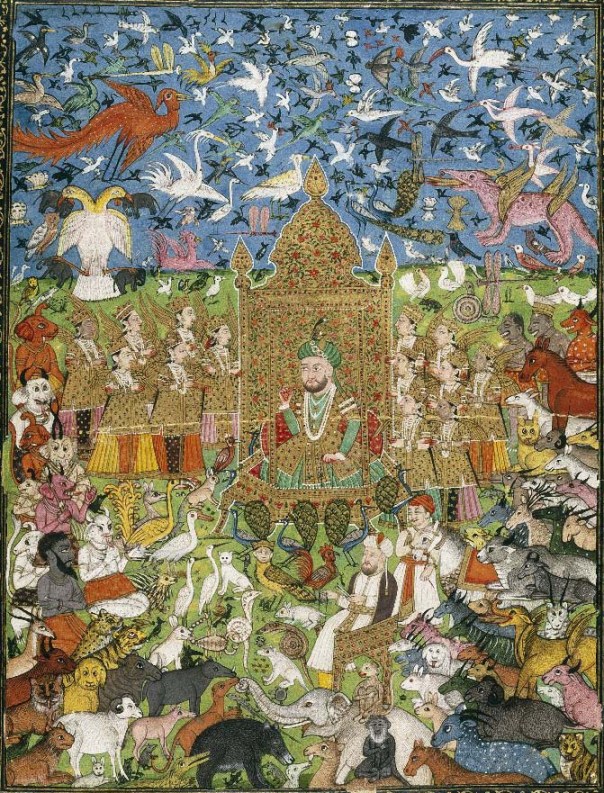 The Prophet Suleiman and His Court (Deccan, Hyderabad: Wikimedia)

And there is no creature on the earth or bird that flies with wings except [that they are] communities like you (Qur’an 6:38).

Animals have played significant roles within the theological, artistic, legal, ethical, and literary traditions of Muslim communities. In the Qur’an, animals—unlike people—submit naturally to God: “each one knows its own prayer and praise” (24:41) and they, together with nature, constitute natural signs (ayāt) through which humans might come to know God. “The beasts of all kinds that He scatters throughout the earth … are signs for a people who are wise” (2:164), and even the smallest gnat is a parable through which God communicates with humankind (2:26).

As signs and worshippers of God, animals are worthy of great respect. Interaction with them is addressed in the Hadith—the sayings of the Prophet Muhammad—in which Muhammad compares acts of cruelty toward animals with cruel acts toward humans. He further relates that a woman’s sins were forgiven for showing kindness to a dog, and that on Judgment Day God will remember mercy shown even to the smallest sparrow. More personally, the Prophet was, according to some sources, so fond of cats that he declared that “love of cats is part of faith.” Many such Prophetic sayings encapsulate the respect for animals for which Muhammad was famed. Such compassion is at the core of many laws concerning treatment of animals. Their slaughter, for instance, must follow a strict set of requirements (halal) to ensure that the animal is killed with minimal pain.

Beyond these early source texts and traditions, animals continue to hold a special place in many Muslim communities. Artists have incorporated them into stylized calligraphic designs, detailed miniature paintings, and even into the decoration of mosques. Here, and also in literature, animals are enmeshed in symbols and associations that reflect both Muslim and indigenous traditions. Indeed, some of the great literary works of Muslim societies, from the twelfth-century Persian epics to contemporary Gujarati short stories and Chinese novels, centralize animals. Through their use in such texts we can examine the interplay of allusions from classical Islamic texts, local traditions, and even Western literature, providing us with a complex view of the societies which these works depict and in which they are composed.

By focusing on the role of animals in Islam, this conference will employ a single theme through which to explore the complex matrix of Muslim communities. This exploration will inevitably intersect with other themes, offering rich perspectives. Each panel of leading scholars and activists will examine the role of animals within a different framework, and in so doing will elucidate a unique lens through which we can approach a subject that has been marginalized in public understandings of Islam.

← The myth of Islamic terrorism in Europe & USA
Are Arabs Superior in Islam? (Video) →