A Good Muslim equates to a good Human Being 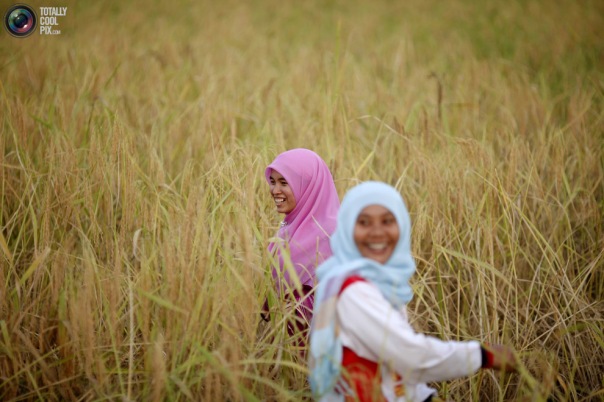 Ihsan is a special Islamic term, defined by the famous hadith known as the Hadith of Jibreel.

Once Angel Jibreel (peace be upon him) visited the Prophet (peace and blessings be upon him) in the guise of a man and in the presence of the Companions. This happened toward the end of the Prophetic mission and its purpose was to summarize some fundamental teachings of Islam for the education of all of us.

Jibreel (peace be upon him) asked questions about Islam, Iman, Ihsan, the Day of Judgment, and Fate. Regarding Ihsan, the Prophet (peace and blessings be upon him) responded: “It is that you worship Allah as if you are seeing Him. For though you see Him not, verily He is seeing you.” (Muslim) Obviously, our worship will be at its best when performed with that feeling. Ihsan, therefore, means striving for excellence in achieving piety, through an overwhelming feeling of closeness to Allah.

For anyone seeking spiritual purification, this is the goal. Abdul-Hameed Siddiqi, well known for his English translation of Sahih Muslim, notes that what is implied by the term tassawuf is nothing but Ihsan. With that in mind we can understand the joy of the person who once reported to his mentor that he had achieved Ihsan in his Prayers. He felt being in the presence of Allah every time he stood up for Prayer. “It is great that you should feel that way while praying,” his mentor replied. “But, do you have the same feelings when you are dealing with others? Have you attained Ihsan in your relations with your spouse and children; your relations with friends and relatives? In all social relations?” To the perplexed disciple he went on to explain that one must not restrict the concept of Ihsan to the performance of ritual prayers. The term is general and applies to all endeavours in our life.

The Sufi mentor in this story was Dr. Abdul Hai Arfi, himself a disciple of Maulana Ashraf Ali Thanvi. One of the many great contributions of Maulana Thanvi was that he reintroduced Islamic teachings regarding social relations and dealings with others as a religious issue. His message was: You must become a good human being before you can ever become a good Muslim. This message destroys a disastrous and tragic misconception that reduces Islam to only the performance of the ritual acts of worship -the pillars- thus robbing it of much of the rest of the building. A very important and integral section of that building deals with our social relations. It is concerned with how we behave in the family. How we interact with relatives, friends, neighbours, colleagues, and all the rest of humanity.

The cornerstone of Islamic teachings in this area is the requirement that we do not cause anyone any harm through our words or actions. A famous hadith states, “A Muslim is the one from whose hands and tongue other Muslims are safe.” (Bukhari). Keeping others safe from our hands and tongues does not only mean that we do not hurl stones or abuses at them, it also means that we do not say or do anything that would hurt them.

Islam wants to build a society, which is a model of civility, courtesy, and consideration for others.

This hadith clearly describes this as a defining trait of a Muslim. While it refers to “other Muslims”, scholars agree that it is a general requirement that equally applies to non-Muslims except those who are at war with Muslims. A person who through his intentional or careless actions or words inflicts unjustified pain on others is not worthy of being called a Muslim.

We can begin to appreciate the value of this teaching by realizing that most problems in our lives are man-made. Life can become living hell if there are problems within the family: the tensions between the spouses, the frictions between parents and children, the fights between brothers and sisters and other relatives. Today these are common stories everywhere. But can these problems occur and reach the intensity they do if everyone is genuinely concerned about not hurting others? The same applies to relations between friends, neighbours, colleagues, and communities.

Islam wants to build a society, which is a model of civility, courtesy, and consideration for others. It does so by emphasizing these attributes as a matter of faith. It is narrated on the authority of Abu Huraira that Allah’s Messenger (peace and blessings be upon him) said: “Faith has over seventy branches or over sixty branches, the most excellent of which is the declaration that there is no god but Allah, and the humblest of which is the, removal of what is injurious from the path.” (Muslim) This is consideration. And obviously, there is no trace of Iman below this.

We see this consideration for others throughout the life of the Prophet Muhammad (peace and blessings be upon him). Of course, such an attitude shows itself in “minor” details. For example, Muslim narrated that whenever the Prophet (peace and blessings be upon him) visited a group where some people were asleep and others were not, he would greet them with a low enough voice so those awake could hear him while those asleep would not be disturbed. Every night when he used to get up for Tahajjud (late night Prayer) -a voluntary prayer for the rest of us- he would walk out of the bed very quietly so as not to disturb his sleeping wife.

Whenever he saw someone commit a wrong that needed to be corrected in public for the education of others, he would mention it in general terms, not naming the person who did it. This last practice also shows the two extremes in this regard that must be avoided. On the one hand is the temptation to compromise on the issue of right and wrong to avoid hurt feelings. On the other is the temptation to correct the wrong with total disregard to the fact that one might be insulting or injuring the other person. While we may see these extreme attitudes in people who seem to be poles apart in terms of their practice of religion, both stem from the same narrow vision of religion that holds our dealings with others as worldly affairs, outside the realm of Islam!

It is good to remember that Islam is a way of life. We must submit our whole life, not a small subset of our choosing, to the commands and teachings of Allah and His Prophet (peace and blessings be upon him). Our commitment to Islam must not only be life-long but also life-wide.