← Controlling Our Emotions As Muslimahs
A Short Explanation of The Quran →

Just in case if you think that Muslims are the only one who wears Burqa. Here is Haredi burka Jewish sect that observe more stricter Veil than Muslims.

Ultra-Orthodox Jewish women proudly dress modestly in order not to attract attention of men who are not their husband.

Now, in some ultra-Orthodox Jewish sects, women have gone to a new level of modesty by covering their whole body and face.

According to Wikipedia the sect is called “Haredi burka sect” or “Taliban mothers”. Many of these families dress their young girls of all ages with the same full dress garb, except for the face veil. This modest ultra-Orthodox Jewish sect, is concentrated mainly in Israel, in which ultra-Orthodox Jewish women feel that modesty requires covering their entire body burqa-style, including a veil that covers the face.

The garment, which is more like a burka niqab, is also called frumka, a play on the word frum (Yiddish for the devotee) and the burka. This ultra-Orthodox Jewish sect, is estimated to have started out with about 100 women in 2008, and grew to several hundred in 2011. To date, there are about 30,000 women who wear shawls, according to Rabbi David Benizri. The group mainly resides in the city of Beit Shemesh.

“This dress code was adopted due to concerns about the state of deterioration of modesty in the ultra-Orthodox Jewish community,” Rabbi Benizri said.

“The rabbi explained to us the benefits of Jewish women dressing modestly. We leave our body for our husbands and we don’t want to share our bodies with others,” Saari Rothberg, 22, who proudly wears the Jewish burqa in Beit Shemesh, Israel told YourJewishNews.com.

What is a burqa? A burqa is usually associated with the dress code of Muslim women, but the word burqa simply refers to
the face-veil portion, which is usually a rectangular piece of semi-transparent cloth whose top is sewn to the corresponding part of the headscarf.” 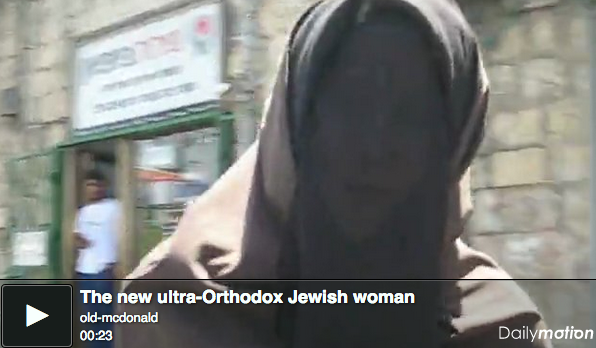 ← Controlling Our Emotions As Muslimahs
A Short Explanation of The Quran →