← What will you say to Allah?
Bombing for peace: The Israeli Paradox → 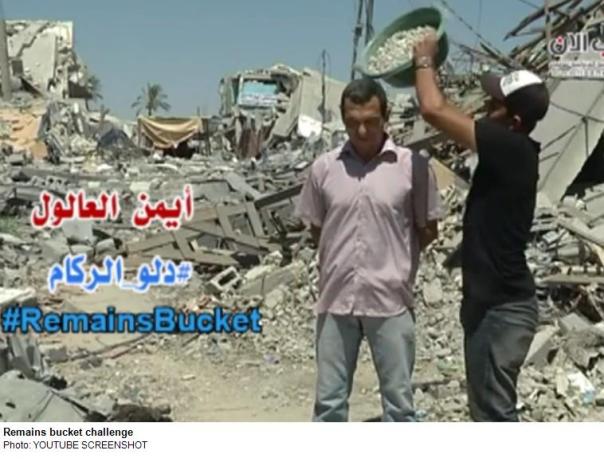 A new trend in support of Gaza is going viral across Arab social media, after a Palestinian journalist filmed himself  dumping a bucket of sand and rubble over his head, in an activity he dubbed the “Remains Bucket” challenge.

The challenge imitates the popular Ice Bucket challenge,in which people photograph themselves pouring a bucket of ice water over their heads, to promote awareness of the disease amyotrophic lateral sclerosis.

Palestinian journalist Ayman Aloul started the trend with a video posted to his YouTube channel on Saturday.

“I liked the idea of the ice bucket challenge, so I decided to invent the Palestinian version,” Aloul says, as he stands amid the rubble of a bombed out building in Gaza.

Aloul says that the Remains Bucket challenge is a way of showing empathy for Gazans affected by Operation Protective Edge, by enabling those who take the challenge to show they understand the children’s suffering.

Explaining why he chose rubble instead of water, Aloul said that water is a scarce resource in Gaza, and would be difficult to freeze.

Pointing to the rubble, he said he decided to use that for the Palestinian version of the challenge, instead of water.

The trend quickly caught on in, and beyond, Gaza.

Among those taking the challenge include Jordanian comedian Mohammed Darwaza, who said it enabled him to feel the pain felt by children in Gaza.

← What will you say to Allah?
Bombing for peace: The Israeli Paradox →