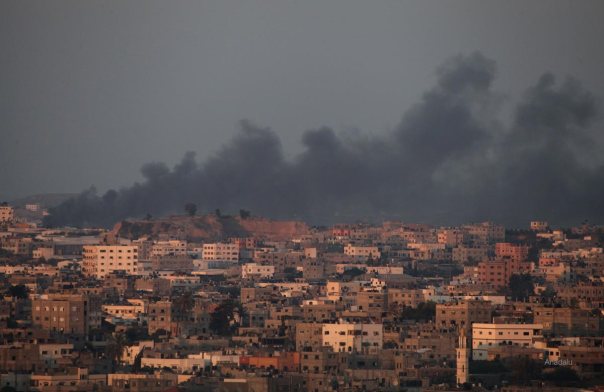 Israel has bombed the Gaza Strip with 20,000 tons of explosives, equivalent to six nuclear bombs, the Palestinian interior ministry said on Thursday.

In a statement quoted by Anadolu news agency, the ministry accused the Israeli army of using internationally banned weapons and highly explosive missiles during its current offensive on Gaza, which has so far led to the death of more than 2,000 Palestinians, most of them civilians, including women and children.

The statement pointed out that the Israeli army has used its war arsenal at its full capacity, for example all types of war crafts, including drones, Apache helicopters, VTOL, F15 and F16 aircrafts, all of which launched a variety of missiles, most notably MK82, MK83 and MK84, which cause massive explosions and the complete destruction of the targeted areas.

Indeed, according to the explosives police in Gaza, the Israeli army has launched more than 8,000 highly explosive MK missiles in its current war on Gaza.

The statement also noted that Israeli tanks deployed in the east of Gaza have fired highly explosive rockets on the homes and properties of civilians, causing considerable damage to them, especially in neighbourhoods in Rafah and Khan Younes in the south, Shujayea in the east and Beit Hanoun in the far north.

Using these tanks, “the occupation army has fired over 60,000 artillery shells of various sizes and targets on Gaza,” the statement said, adding that the Israeli army also used air-fuel rockets, as well as flechette, dime and depleted uranium bombs.

The ministry warned that Israeli shells emit radiation that harms the environment, soil and water, and spreads diseases among the coming generations, especially cancer.

The Palestinian ministry of health announced that the death toll in the ongoing Israeli offensive in Gaza now exceeds 2,084 Palestinians, with more than 10,000 injured, as of Thursday evening.

According to Israeli statements, 64 soldiers and three civilians have been killed in Israel and over 530 have been injured, mostly as a result of “panic”. Hamas, however, insists that it has killed 161 Israeli soldiers, holding an additional one hostage.