Israel-Gaza conflict: Israel to call up 10,000 reservists as Hamas vows revenge for the killing of three of its commanders in an airstrike 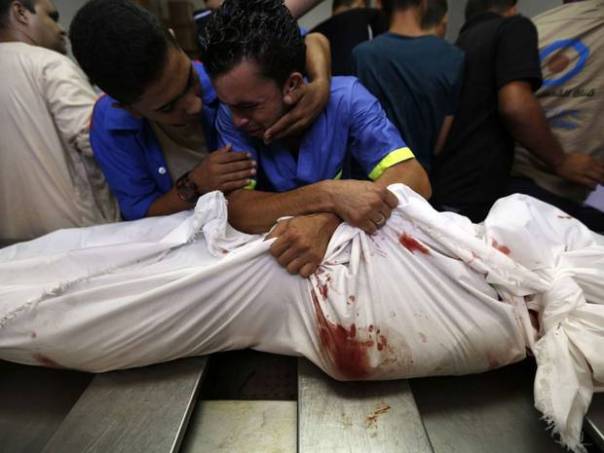 Israel said it would call up 10,000 reservists as Palestinians vowed to avenge Israel’s killing of three Hamas commanders in Gaza this morning.

The pre-dawn strike levelled a four-storey house in a densely populated neighbourhood of the southern town of Rafah, killing six people, including Mohamed Abu Shamaleh, Raed Attar and Mohamed Barhoum. Both Israel and Hamas identified the commanders killed in the 3am air strike.

Meanwhile, a senior Hamas leader said the group had carried out the kidnapping and killing of three Israeli teenagers in the West Bank in June, an incident which helped spark the current conflict. Saleh Arouri said Hamas’s military wing, the al-Qassam Brigades, carried out what he described as a “heroic operation” to create a new Palestinian uprising.

Thousands of Palestinians marched through Rafah in a funeral procession firing guns, waving flags of different militant groups and chanting religious slogans. Those killed were carried aloft through the crowd on stretchers, wrapped in green Hamas flags.

Sami Abu Zuhri, a Hamas spokesman, said Israel “will not succeed in breaking the will of our people or weaken the resistance” and “will pay the price”.