← OMAR IBN AYAZ: YOU DONT UNDERSTAND ME!! (VIDEO)
This is not our Religion → 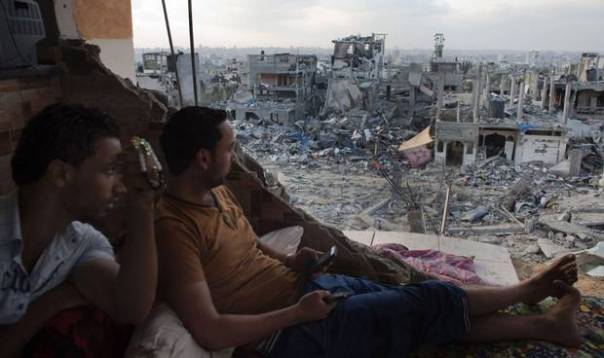 The United Nations’ top humanitarian official in the Middle East yesterday issued an impassioned appeal for a new deal for Gaza to end the “collective punishment” of its 1.8 million inhabitants imposed by Israel’s seven-year blockade of the territory.

As Egyptian mediators prepared to renew efforts today to persuade Israel and Hamas to agree a durable peace deal to end more than a month of conflict, Pierre Krähenbühl, Commissoner General of the UN Palestinian refugee agency UNRWA, warned: “You cannot just return to the pre-existing conditions under the blockade.”

The ending of the blockade is one of Hamas’s key demands in the Cairo peace talks. Yesterday, Hamas’s head of foreign affairs, Osama Hamdan, said on his official Facebook page that Israel’s position did not meet the aspirations of the Palestinians. And he warned: “Israel must accept the demands of the Palestinian people or face a long war.”

Mr Krähenbühl, who has direct responsibility for the education and health provision for 1.2 million Gazans, said he had been struck before the conflict started that, with youth unemployment running at 65 per cent and an increase in those receiving UNRWA (UN Relief and Works Agency) food aid from 80,000 to 830,000 since 2000, people here had “no freedom of movement, no real hope that anything significant is going to change, and all that the result of the blockade”. Swiss-born Mr Krähenbühl added: “No one can be proud of those statistics.”

With “tens of thousands” now homeless mainly as a result of Israeli bombardment, and 225,000 displaced residents still sheltering in UNRWA schools, he added: “In addition to all that, you now have destruction, loss of life, injuries, trauma … you can’t have these people, who have already been affected by the blockade and endured this level of violence, and leave them like this.”

The Commissioner General said an extended ceasefire was “vitally important” both for Palestinians “who have gone through so much suffering” and for Israelis, so they could be free of rocket fire “which I have always said should cease”.

But he added that “looking at the lives lost in Gaza and the extent of destruction, we need something different than returning to the pre-existing state” of the blockade, which Israel imposed after Hamas’s forcible seizure of full control of the territory in 2007. Mr Krähenbühl said from UNRWA’s perspective the blockade was illegal “under international humanitarian law”.

On the most immediate issue – the ban on importing construction materials, he said it was “socially untenable” for people not to be able to rebuild their shattered homes. He said he recognised Israel’s legitimate security concerns, but added that the blockade “amounts in many ways to a form of collective punishment”.

He had been struck by a recent conversation with a Gaza businessman who had lamented that while he had traded with Israelis and learnt to “understand” their concerns over a long period before the blockade, his children had never met an Israeli and knew their neighbours through barriers, the blockade and military interventions with “tanks and shells”. Mr Krähenbühl added: “No longer having the personal knowledge nor being able to engage with the other is a very serious issue for the future.”

He also stepped up pressure on Israel to conduct a “thorough, comprehensive, open and transparent” investigation into the strikes on three UN schools used as refuges for displaced residents in Beit Hanoun, Jabalya and Rafah, which caused multiple deaths and injuries.

The UN has already denounced the lethal Israeli strikes on the schools at Rafah and Jablaya, the latter hit by artillery shelling. Mr Krähenbühl said that while he had not had the data to attribute the Beit Hanoun attack to Israel at the time – and he did not want to pre-judge any inquiry – he did not think there was “much doubt that it was an Israeli operation”.

He said he was not suggesting that those who attacked the schools did so deliberately, but that Israel had an obligation under international law to conduct a full investigation as the “party responsible for a military operation or a shelling that causes loss of life by civilians”.

Mr Krähenbühl also denounced an attempted “narrative” which had surfaced in some Israeli and Western media that because UNRWA had discovered rockets stored by militants in three of its empty schools this somehow justified further attacks on UNRWA schools.

“I have to say in the strongest terms that not only resists any honest scrutiny under international humanitarian law, but it’s just completely unacceptable and irresponsible,” he said.

Mr Krähenbühl, who has 25 years’ experience of war zones, said that 11 UNRWA staff members had been killed in this conflict and it was a tribute to the “courage and resolve” of UNRWA’s 12,500 staff that they had carried on. He added: “I don’t know of any other international agency that would continue operations after losing 11 people.”

← OMAR IBN AYAZ: YOU DONT UNDERSTAND ME!! (VIDEO)
This is not our Religion →