John Legend on Israel-Gaza: ‘So sick watching our Secretary of State grovel to tell Israel how much he loves them’

John Legend’s Twitter comments about the American government’s involvement in the Israel-Gaza conflict were met with the now familiar contrast of applause and distain.

The latest in an ever-growing line of famous faces passing comment on the worsening violence in the Middle East via social media, the singer/songwriter posted the following on US Secretary of State John Kerry’s recent attempts to broker a ceasefire deal between the Israelis and the Palestinians:

“So sick watching our Secretary of State have to grovel so hard to tell Israel how much he loves them while Israeli cabinet shits on him.”

“Thank you for standing up for humanity!” one follower wrote.

However, not all were so positive.

“Don’t talk about things you know nothing about,” one fan responded.

“But you probably think Obama’s done a single positive thing for this country. Another clueless celebrity,” one tweeted.

“Thats Bcause Israel cabinet is not Naie/stupid to beleibe words of Obama administration like US media/public[sic]” said another.

Legend later clarified his comments by posting the following: 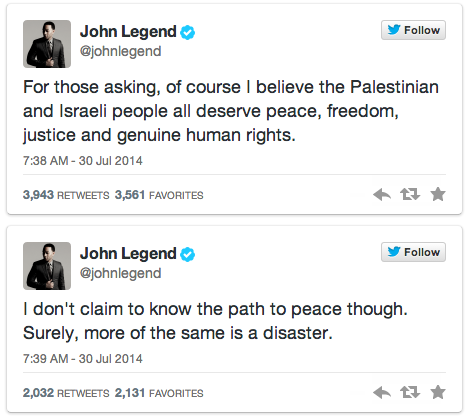 The American musician and actor, 35, has been vocal in his support for the plight of the Palestinian refugees in the past.

Speaking to graduates at the University of Pennsylvania, the Penn alum delivered a heartfelt speech to students on the meaning of love.

“[Love is] a pretty radical notion. It means your daughter or son, your neighbor’s daughter or son and the daughters and sons of people who live thousands of miles away, all deserve the right to life, liberty and the pursuit of happiness. It means we let go of fear and see each other’s humanity.