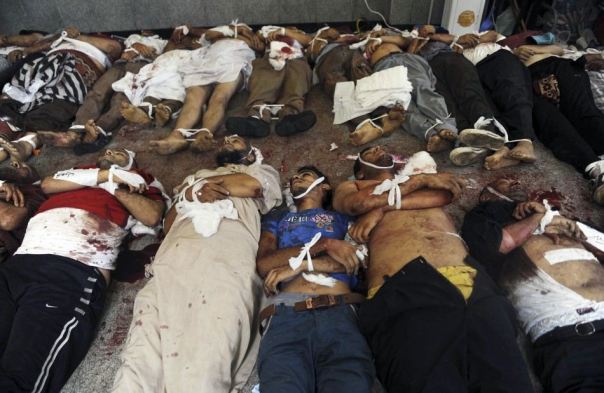 Egyptian officials planned a systematic massacre of hundreds of demonstrators at two protest camps in what probably amounts to crimes against humanity comparable to the 1989 killing of protesters around China’s Tianamen Square, according to Human Rights Watch.

The New York-based organisation published a 188-page report based on a year-long probe and urged the UN to investigate six incidents in which 1,000 or more unarmed supporters of elected Islamist president Mohammed Morsi were killed around Rabaa al-Adawiya mosque in August 2013.

Executive director Kenneth Roth, who was denied access to Egypt on Monday, said the deaths were “one of the world’s largest killings of demonstrators in a single day in recent history”.

“This wasn’t merely a case of excessive force or poor training. It was a violent crackdown planned at the highest levels of the Egyptian government. Many of the same officials are still in power in Egypt, and have a lot to answer for.”

Roth and a colleague, Sarah Leah Whitson, were deported after being held for 12 hours at Cairo International Airport on the grounds that they were coming to “work illegally”. They held a videoconference from abroad. The executive director said that banning the organisation from Egypt “will not make the world forget”.

HRW documented 817 people killed in the clearing of the Brotherhood sit-in at Cairo’s Rabaa al-Adawiya of protesters opposed to the military coup. However, HRW fellow Omar Shakir stressed that the death toll is a “minimum figure”.

The report says Egyptian forces “methodically opened fire with live ammunition on crowds” protesting against Morsi’s removal. “Given the widespread and systematic nature of these killings,” the report adds, “these killings most likely amount to crimes against humanity.”

Current president Abdul Fattah al-Sisi was then army chief and called the forceful break-up of sit-ins. He was elected head of state in May 2014 after overseeing the ousting of president Mohammed Morsi in July 2013.

The report calls on UN member states to investigate Sisi and nine other senior security officials for serious crimes under international law.

One of the security officials singled out by HRW for investigation is intelligence chief Mohamed Tohamy, who met US secretary of state John Kerry in Washington DC in April.