Who Invented the Scientific Method?

The question of who invented the scientific method is extremely difficult to answer, simply because it is difficult to pin down exactly where it started.

The scientific method evolved over time, with some of history’s greatest and most influential minds adding to and refining the process.

Whilst many point to Aristotle and the Greek philosophers as the prime movers behind the development of the scientific method, this is too much of a leap.

Whilst the Greeks were the first Western civilization to adopt observation andmeasurement as part of learning about the world, there was not enough structure to call it the scientific method.

It is fair to say that Aristotle was the founder of empirical science, but the development of a scientific process resembling the modern method was developed by Muslim scholars, during the Golden age of Islam, and refined by the enlightenment scientist-philosophers.

The Muslims and the Scientific Method

Muslim scholars, between the 10th and 14th centuries, were the prime movers behind the development of the scientific method.

They were the first to use experiment and observation as the basis of science, and many historians regard science as starting during this period.

These steps are very similar to the modern scientific method and they became the basis of Western science during the Renaissance.

Al-Haytham even insisted upon repeatability and the replication of results, and other scholars added ideas such as peer review and made great leaps in understanding the natural world.

Europe and the Renaissance

The question of who invented the scientific method shifts to Europe as the Renaissance began and the wisdom of the Greeks and Arabs helped Europe out of the Dark Ages.

Roger Bacon (1214 – 1284) is credited as the first scholar to promote inductive reasoning as part of the scientific method.

Here, findings from an experiment are generalized to the wider world, a process used by almost all modern scientists. His version of the Islamic scientific method involved four major steps, which lie at the root of our modern method.

This process continued with the Enlightenment, with Francis Bacon (1561 – 1626) and Descartes (1596 – 1650). Francis Bacon continued the work of his Renaissance namesake, strengthening the inductive process. His method became:

Bacon’s inductive method was a way of relating observations to the universe and natural phenomena through establishing cause and effect.

Descartes broke away from the model of induction and reasoning and again proposed that deduction was the only way to learn and understand, harking back to Plato. His method was almost the reverse of induction: 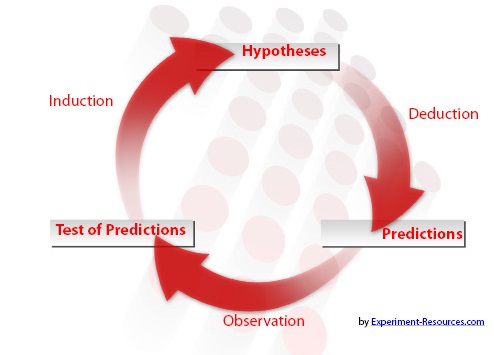 Descartes believed that the entire universe was a perfect machine and that, if you knew the first principles, derived from mathematical proofs.

As an example, he deduced that planets revolved around the sun because they were floating in a liquid ‘ether’ filling space!

Newton and the Modern Scientific Method

Any discussion about who invented the scientific method must include Isaac Newton, as the scientist who refined the process into one that we use today.

He was the first to realise that scientific discovery needed both induction anddeduction, a revolution in the scientific method that took science into the modern age.

However, it may no longer be correct to talk of the ‘scientific method,’ rather the ‘Physics Method’ or the ‘Psychology Method,’ because each scientific discipline has started to use its own methodology and terminology.

However, it is an old quote, but Newton’s statement that, ‘If I see further, it is only because I stand upon the shoulder of giants’, is very apt when looking at who invented the scientific method.

All of these great thinkers, and many others beside, had a great influence upon determining the course of modern science as we know it.

So, when you ask ‘Who invented the Scientific Method?” the answer is no-one, as the scientific method is in a state of constant evolution and modification.

Sadly, if you were looking for a simple answer that will fit into the short answer section of a test, you will not find it here!