The Arab Revolt of World War One

No war has had as big an impact on the modern Middle East as the First World War, which lasted from 1914-1918. The war signaled the end of the Ottoman Empire, a major world power since the fifteenth century, and the final victory of Western European imperialism. In the aftermath of the war, almost the entire Muslim world was occupied by foreign forces, something that had never happened before, not during the Crusades, the Mongol invasion, or the Spanish Reconquista. One of the most important (and most debated) aspects of WWI was the revolt of the Arabs against the Ottoman Empire. Was this revolt a manifestation of overwhelming Arab resistance to the Turkish Ottoman Empire, or just a small band of warriors who did not represent Arab sentiment at large?

The Ottoman Empire had ruled much of the Arab world since Sultan Yavuz Selim conquered the Mamluk Empire in the 1510s. Syria, Iraq, and Egypt had been core provinces of the Ottoman State for centuries, but Ottoman control also extended to distant Arab regions in the Arabian Peninsula and North Africa.

At its core, the Ottoman Empire was a multi-ethnic state. The ruling family was Turkish, but the population was made up of Turks, Kurds, Greeks, Armenians, Bosnians, Serbians, Persians, Arabs, and others. And for the most part, this multi-ethnic empire did not suffer from its diversity. In the 1800s, however, a wave of European nationalism began to hit the Ottoman realm. In 1832, the Greeks (with strong British support) managed to gain independence from the Ottomans. The Serbs attempted to follow, supported by Russian arms and money.

Nationalistic feeling also spread to the Turks themselves. Many young Turkish students studied in European cities such as Paris and London in the 1800s, and adopted European ideas of nationalism, which conflicted with the multi-ethnic nature of the Ottoman Empire. Turkish nationalism was slowed somewhat by the reign of Sultan/Caliph Abdülhamid II, who reigned from 1876 to 1908. He emphasized pan-Islamism and the unity of the empire’s subjects based on their religious affiliation, not their ethnic identities.

But even Abdülhamid’s authoritarian rule could not turn back the rising tide of nationalist thought. A group of Western-educated Ottoman army officers, known as the Committee of Union and Progress, or the Young Turks, overthrew Abdülhamid in 1908. The Young Turks took control of Ottoman government and began a process of Turkifying the empire, at the cost of marginalizing the empire’s other groups.

Meanwhile, the empire’s Arab regions were not immune from nationalism either. Major Arab cities such as Damascus, Beirut, and Cairo became hubs of Western thought, where the concept of Arab nationalism began to take form. It was especially aided by American missionaries, who were unable to convert local Muslims to Protestantism, but succeeded in establishing numerous educational institutes that imbued a sense of national identity among Arab students.

It is important to note, however, that while nationalist though was beginning to take hold among Western-educated Turks and Arabs, it was hardly a mainstream ideology. Most Arabs and Turks were content to be a part of a multi-ethnic empire. Some simply demanded more autonomy for ethnic groups within the Ottoman State. A wide range of nationalist beliefs existed, but it is safe to say that those advocating for a complete break from Ottoman history and the establishment of ethnic nation-states were a small minority.

Sharif Hussein and the British

The European powers, however, believed it was only a matter of time before ethnic tensions would erupt into fully-fledged independence movements. Thus, when World War One began in the summer of 1914 and the Ottoman Empire found itself opposed to Britain, France, and Russia, the British figured they could use what they believed to be popular Arab sentiment for independence to their advantage. They believed that supporting a popular Arab uprising against the Ottomans would significantly help their war efforts in the Middle East.

The British did not have to look hard for an Arab man willing to lead this supposed Arab uprising. The disgruntled local emir (governor) of Mecca, Sharif Hussein, was a prime candidate. He was nominally appointed by the Ottoman sultan to his post, but had fears that they would soon replace him. He also had dreams of becoming an independent ruler of Hejaz (the west of the Arabian Peninsula), and perhaps even king of all the Arabs.

Due to Sharif Hussein’s descent from Banu Hashim (the same tribe as the Prophet Muhammad) and his willingness to revolt against the Ottomans, the British believed that he could rally the millions of Arabs of the Ottoman Empire to arms against their Turkish overlords. In a series of letters from late 1915 to early 1916, the British enticed the Hashemite emir to rebel, and promised to supply him with money, weapons, ships, and men, believing that this would snowball into a large-scale Arab revolt. Sharif Hussein and his son Feisal encouraged such British thinking, and even bragged to British agents that they would be able to get 100,000 to 250,000 Arab soldiers in the Ottoman Army to defect.

The Arabs Revolt…Or Did They?

Sharif Hussein declared his rebellion against the Ottoman Empire in early June of 1916. Word was sent out (with British help, of course) to Arabs throughout the empire to join Sharif Hussein as he built a new Arab kingdom, free from Ottoman domination. The response was lackluster, to say the least. Besides a few thousand desert warriors from Sharif Hussein’s own tribe, absolutely no Arabs flocked to Sharif Hussein’s side. In fact, the only non-Hejazi soldiers that took part in the Arab Revolt were Arab prisoners of war captured by the British and enticed to switch sides.

Further disappointing the British, Sharif Hussein did not seem to be interested in Arab nationalism at all. His only motivation seems to have been to create a kingdom that he would personally be the ruler of. The resurgence of Arab identity, literature, and culture did not interest him nearly as much as personal power. The British were not looking to create a powerful, independent monarchy. They wanted a mild form of Arab nationalism they could control as another part of their empire. But support for such an idea did not exist, contrary to their pre-war calculations.

But despite getting almost no support from the general Arab population, Sharif Hussein’s revolt was not unsuccessful. With British technology, money, and naval power, he was able to gain control of the Hejaz fairly quickly, with the exception of Medina, where the Ottoman commander Fakhri Pasha held the city of the Prophet ﷺ for the Ottoman Empire until 1919, well after the war ended. Thus, Ottoman army units were tied down in the Hejaz, instead of protecting other fronts in Palestine and Iraq, which were under attack by the British. 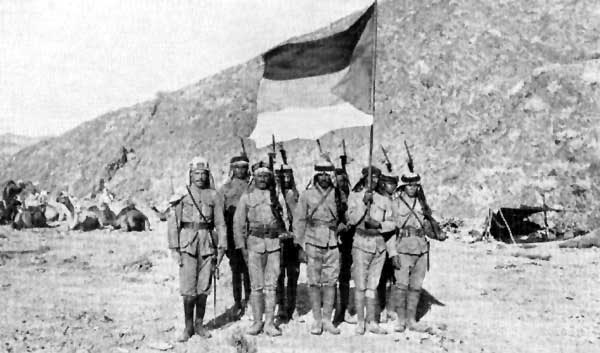 It is important to note that the British were also in contact with the Hashemites’ arch rivals, the Saudis, who controlled the eastern part of the Arabian Peninsula. The Saudis had revolted against the Ottomans before, notably in the early 1800s, but the British aimed simply to keep them neutral, to prevent them from hampering the revolt of Sharif Hussein. The Saudi role in WWI was minor, and attempts to attribute the entire fall of the Ottoman Empire to a Saudi revolt are based in no more than conjecture and conspiracy.

As the war drag on, British support for the Hashemite revolt continued to grow, especially as Sharif Hussein showed his inability to lead a major rebellion. His small group of tribesmen had no artillery or machine guns, which had to be provided and manned by British soldiers, usually from Egypt and India. Also instrumental was the role played by a young British army officer, who would later be famously known as Lawrence of Arabia. It is doubtful that without such British support, Sharif Hussein’s effort would have even survived the first few months after the revolt was declared.

As the British army made its way up the Palestinian coast in 1917, the Arab rebels helped by harassing Ottoman supply chains leading to the front lines. By December of 1917, the British captured Jerusalem as Ottoman resistance collapsed. The British and their Arab allies continued to advance as the war died down, capturing the ancient cities of Damascus and Aleppo in October of 1918. By then, almost all of the Arab regions of the Ottoman Empire had been conquered and subjected to British authority. At this point, the promises the British made to Sharif Hussein regarding a united Arab kingdom began to be a big issue.

In exchange for his rebellion against the Ottomans, Sharif Hussein expected to be given control of the Arabian Peninsula, Syria, and Iraq by the British. But in keeping with British imperial traditions, their promises did not mean much. The Arab lands were partitioned after the war by the new League of Nations. Britain already had control of Egypt since the 1800s, but was now also given mandates over Palestine, Transjordan, and Iraq, while the France got mandates over Syria and Lebanon. 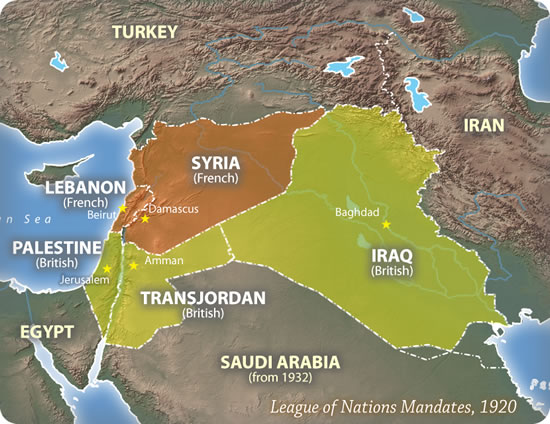 Sharif Hussein’s son Feisal was crowned king of Syria in 1920 but was quickly overthrown by the French when he sought to establish true authority, independent from Europe. The next year, Britain installed him as king of Iraq, despite the fact that very few people in Iraq even knew who he was. Feisal and his descendants ruled Iraq with strong British support until they were deposed in 1958 by members of the Iraqi military.

Meanwhile, in the Hejaz where the revolt started, Sharif Hussein was still trying to establish himself as a powerful monarch. He declared himself caliph after Atatürk abolished the Ottoman caliphate in 1924, but just like his revolt a decade earlier, no one took Hussein’s pretensions seriously outside of his own tribe. He died in late 1924 and was succeeded by his eldest son Ali, but Hashemite control over Hejaz was coming to an end. In 1925, the Saudis conquered Hejaz and established the modern state of Saudi Arabia. The only place where Hashemite control lasted was in Jordan, where Sharif Hussein’s descendant, King Abdullah, still rules over the country today.

In conclusion, while the Arab Revolt was no doubt a major event in modern Middle Eastern history, it was not as impactful as many make it out to be. It was far from a general Arab rebellion against the Ottoman Empire, and the ultimate fall of the Ottoman Empire had more to do with British military ability, and the centuries-long decline of Ottoman power. Simultaneously, the politicians in charge of the Ottoman Empire at the time certainly created an atmosphere where revolts against the Turkish-dominated government were to be expected. Political and ethnic identities today drive much of the rhetoric regarding the Revolt, yet it may be better to view it simply as a minor historical event in the greater decline of the Ottoman Empire and rise of European imperialism instead of a bone of contention between Arab and Turkish Muslims.

Fromkin, David. A Peace to End All Peace: The Fall of the Ottoman Empire and the Creation of the Modern Middle East. New York: H. Holt, 2001.

Hodgson, Marshall G. S. The Venture of Islam: Conscience and History in a World Civilization. Vol. 3. Chicago: U of Chicago, 1974.

Hourani, Albert. A History of the Arab Peoples. Cambridge, MA: Belknap of Harvard UP, 1991.