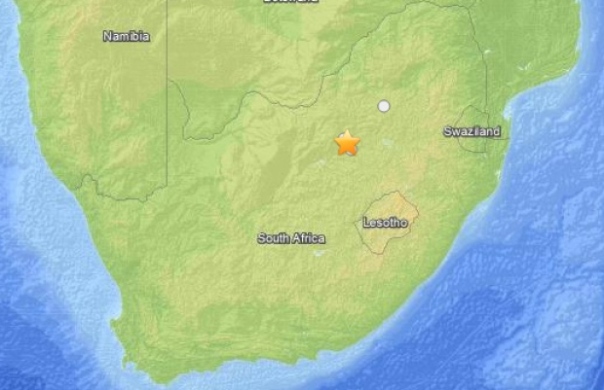 An earthquake shook buildings in Johannesburg and surrounding areas in South Africa’s most populous province on Tuesday, killing one person and injuring at least 17 at mining operations near the epicenter.

The magnitude-5.3 quake was centered in Orkney, 170 kilometers southwest of Johannesburg, the U.S. Geological Survey said.

One man died when a wall of a disused mining building fell on him, said Werner Vermaak, a spokesman for emergency responders working in the Orkney area, a center of gold-mining operations. Mine managers ordered the evacuation of workers from shafts, Vermaak said.

Another emergency responder, Russel Meiring, said later that the mining area had been deemed safe.

AngloGold Ashanti, a mining company, said 17 employees at two mines in the Orkney region sustained minor injuries. Power was cut to operations there but has mostly been restored, the company said.

Three people were hurt when the quake damaged a training center at a mine, said Phoka Sefali, a receptionist at a hospital in Orkney.

“The roof fell on them, but they haven’t got serious injuries,” he said. It was unclear whether those injured at the training center were included in the total of 17 AngloGold Ashanti employees who suffered injuries.

Quakes are a concern to mining companies that operate around Johannesburg, the biggest city in Gauteng province. Mining is a traditional pillar of industry in South Africa.

Lindy Sirayi, a guesthouse owner in Orkney, said the tremor broke glass lampshades and cracked a wall, and that dogs started barking during the quake, which lasted about a minute. Aftershocks were felt, but the electricity in the guesthouse stayed on, Sirayi said.

The quake was also felt in Pretoria, the South African capital, andHartbeespoort, a nearby resort town.

The area has periodic, moderate tremors, though the quake on Tuesday was one of the strongest in recent years.