Now diplomacy has failed, boycotting Israel might be the only way we can protect the people of Gaza 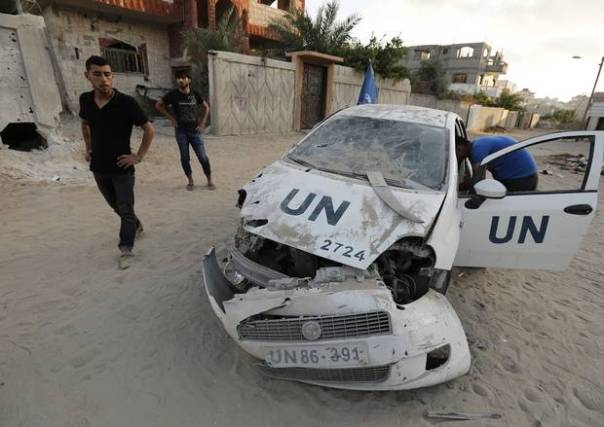 Israel has lost its grip on reality. The death toll in Gaza stands at well over a thousand and continues to rise by the day. The coastal strip has been reduced to rubble. Rather than celebrating Eid this week, Palestinians in Gaza have been burying their dead.

Jon Snow’s poignant message after his return from Gaza on Channel 4 news was heart-breaking. He had been reporting from Al Shifa hospital where he saw many horrific injuries and scores of dead children.

He ended his report with this plea to the public: “If our reporting is worth anything, if your preparedness to listen and watch and read is anything to go by, then together we can make a difference.”

This latest massacre of Palestinians has been well documented, with every death recorded and every bombing filmed. Although this has yet to deter Israel, it is still important to keep documenting this assault so that its victims do not fall into the chasms of history.

But individuals in the international community need to go further than this. They need to boycott Israel. It might be the only thing that ends the impunity that is allowing them to repeatedly assault Palestinian human rights.

This minuscule moment in time when Israel was threatened with being internationally isolated spoke volumes.

Denmark, Norway and Finland condemned Israel’s attack on innocent civilians and have sent substantial humanitarian aid to assist the people of Gaza. However, so far only two South American countries have actively opposed Israel’s war on Gaza. Chile has ceased trade relations with Israel, and Brazil has recalled its ambassador to Tel Aviv.

People are saying that Israel has been defeated morally. But it seems that they don’t care about this, so let us hit them where it hurts. Let us put our efforts into an initiative that helped to end South African apartheid.

The Boycott Divestment and Sanctions (BDS) movement started in 2005 and has been gaining momentum ever since. It has gained support from trade unions and various political groups all over world. They have also been endorsed by many celebrities and academics. In the UK they have had some significant victories, including when John Lewis (after BDS pressure) ceased trading with the well-known Israeli company Soda Stream.

Even locally, boycotting is taking place. In Jerusalem there is a noticeable absence of Palestinians in Israeli cafés and shops. This stems from a fear of Israeli violence against Palestinians but also, according to Palestinians I have spoken to, an attempt to boycott and damage the Israeli economy. In Ramallah, people have been placing stickers on Israeli products in shops saying: 16% of the profits go to the Israeli army” in an attempt to dissuade customers from buying them.

So let us step up our action. Let us boycott Israeli academic institutions, Israeli exports and the companies that have ties with Israel. Because even when Israel stops bombing Gaza, it will not be their final attempt to ethnically cleanse the land of Palestinians.