Hamas and Israel agree to a temporary humanitarian pause in fighting in besieged Gaza Strip from 05:00 GMT on Saturday. 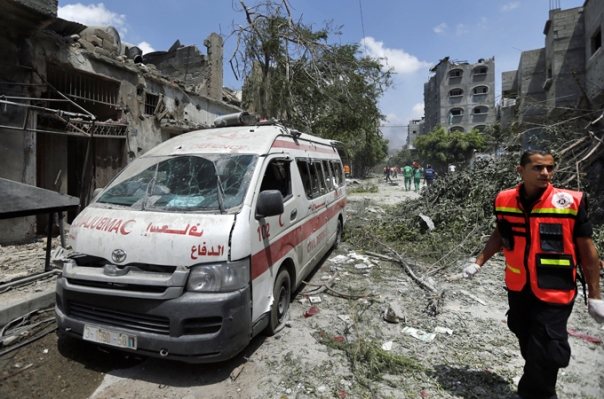 Israel and Hamas have agreed a 12-hour humanitarian truce to begin at 04:00 GMT on Saturday to pause hostilities in Gaza.

Hamas spokesman Sami Abu Zuhri said his movement, together with all armed groups in Gaza, had agreed to the temporary ceasefire which he said was mediated by the United Nations, the Reuters news agency reported.

The announcement came just hours after Israel’s cabinet rejected the terms of a ceasefire championed by the US Secretary of State John Kerry.

At a news conference in Egypt, Kerry, confirmed the rejection but said diplomats were still trying to agree a deal.

“We still have terminology and context to work through, but we are confident we have a framework that will work, and we will continue to work for that … none of us here are stopping.”

Kerry met UN chief Ban Ki-moon in Cairo on Friday, and spoke by telephone to his Qatari and Turkish counterparts.

The secretary of state will fly to Paris on Saturday for another conference on Gaza.

Israel has already indicated it plans to step up its incursion into the besieged strip.

The rising death toll has fuelled anger in the West Bank, where at least nine Palestinians have been killed since Friday prayers in protests described as a “day of rage”.

Al Jazeera’s Imtiaz Tyab, reporting from the West Bank, said: “There were large protests in several cities where some protesters suffered injuries.

“In Hebron, 16 people were been injured after Israeli forces opened live fire on protesters. In Jenin, 14 peope were hurt, most suffering gunshot wounds.

“In Bethlehem, five were injured, one reportedly critically after being shot in the chest.”

Meanwhile, the leader of Lebanon’s Hezbollah group, promised to support Palestinian fighters. In a live television appearance on Friday, Hassan Nasrallah warned Israel that it was “suicide” to continue waging war in the Gaza Strip.

“We are true partners with this resistance … their victory is all our victory, and their defeat is all our defeat,” he said

Gaza’s Ministry of Health has said that 870 Palestinians have been killed since Israel’s assault on Gaza began 18 days ago. More than 5,740 have been injured.

Rockets fired from Gaza into Israel have killed two Israeli civilians and a Thai migrant worker. A total of 35 Israeli soldiers have died in Gaza.