← For the people of sins there are 3 great rivers
CHINA: The Great Mosque of Xi’an → 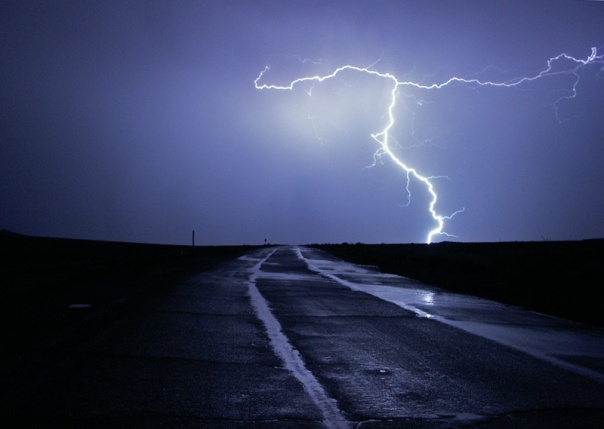 It is now common knowledge, as scientists teach, that THUNDER is a sound caused by the impact between electrical charges found in the clouds. Yet Muhammad had a different opinion on this matter. He claimed that thunder and the lightning are two of Allah’s angels

– exactly like Gabriel.
In the Quran there is a chapter under the title of “Thunder” ( Al Ra’ad) in which it is recorded that the thunder praises Allah. One might think that it does not mean that literally because thunder is not a living being – although, spiritually speaking, all of nature glorifies God.
The expounders of the Quran and its chief scholars, however, insist that Muhammad said that the thunder is an angel exactly like the angel Gabriel and they have no choice but to accept it as a fact.
13: 13        Nay thunder repeateth His praises and so do the angels with awe: He flingeth the loud-voiced thunderbolts and therewith He striketh whomsoever He will…  Yet these (are the men) who (dare to) dispute about Allah with the strength of His power (supreme)!
69: 5        But the Thamud they were destroyed by a terrible storm of thunder and lightning!
Al-Muwatta Hadith  Hadith 56.26
What to Say when it Thunders
Malik related to me that Amir ibn Abdullah ibn az-Zubayr would stop speaking when he heard thunder and say, “Glory be to Allah whom the thunder glorifies with His praise and the angels from the fear of Him.” (Subhana-aladhee yusabihu ar-radu bi hamdihi wa mala’ikatu min khiyfatihi.) Then he would say, “This is a severe warning to the people of the earth.”
In his commentary (p. 329), the Baydawi comments on verse 13 of chapter (13) the Thunder–
“Ibn ‘Abbas asked the apostle of Allah about the thunder.
He told him, ‘It is an angel who is in charge of the cloud, who (carries) with him swindles of fire by which he drives the clouds.”‘
In the commentary of the Jalalan (p. 206), we read about this verse:
“The thunder is an angel in charge of the clouds to drive them.”
Not only ibn ‘Abbas asked Muhammad about the essence of the thunder, but the Jews did too. In the book, “al-Itqan” by Suyuti (part 4, p. 230), we read the following dialogue:
“On the authority of Ibn ‘Abbas, he said the Jews came to the prophet (peace be upon him) and said, ‘Tell us about the thunder. What is it?’ He told them:
‘It is one of Allah’s angels in charge of the clouds. He carries in his hand a swindle of fire by which he pricks the clouds to drive them to where Allah has ordered them.’
They said to him, ‘What is this sound that we hear?’ He said: ‘(It is) his voice (The angel’s voice).”‘
The same incident – the question of the Jews and Muhammad’s answer are mentioned by mostMuhammadan scholars. Refer, for instance, to al-Sahih al-Musnad Min Asbab Nuzul al-Ayat (stories related to the verses of Qur’an, p. 11) and al-Kash-shaf by the Imam al-Zamakhshari (part 2, pp. 518, 519). He reiterates the same story and the same words of Muhammad.
Thus, the incident is in vogue among all Muhammadan scholars, and the story and the dialogue betweenMuhammad and the Jews is well-known.
I have mentioned what the Baydawi, Jalalan, Zamakhshari, Suyuti, and ibn ‘Abbas have said. I do not know (among the ancient scholars) any who are more famous than these.
Concerning lightning, Muhammad affirms that it is an angel like the thunder and like Gabriel andMichael. On page 230 of the above references, Suyuti alludes to it.
Also, on page 68 of part 4 of the “Itqan”, Suyuti records for us the names of the angels, which are:“Gabriel, Michael, Harut, Marut, the Thunder and the Lightning (He said) that the lightning has four faces.”
Al  Suyuti listed all these under the sub-title, “The names of Allah’s Angels”. He also indicated thatMuhammad said that the lightning is the tail end of an angel whose name is Rafael (refer to part 4, p. 230 of the Itqan).
Neither is the lightning an angel whose name is Rafael, nor is the thunder an angel. It never recorded that the angel Gabriel inspired Muhammad to write a complete chapter about his friend the angel thunder.
Thunder and lightning are natural phenomena and not Allah’s angels like Michael and Gabriel asMuhammad claimed.
*** Muhammad’s knowledge of Physics is as ABYSMAL as his knowledge ofAstronomy, Biology, Medicine, History, Religion and Economics ***
Source
Advertisement

← For the people of sins there are 3 great rivers
CHINA: The Great Mosque of Xi’an →