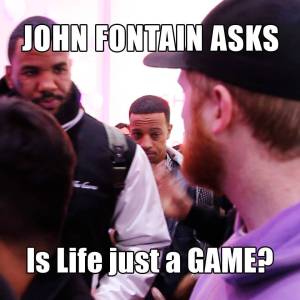 We all have been witness to how much of an effect we can have collectively, how much we can change when we work together. Katy Perry, Amir Khan, Russell Brand, Eminem, Veena Malik and now the rapper The Game have come in touch with Islam. “Dawah Mania” seems to continue. Allah swt facilitated John Fontain to meet  the US rapper in a restaurant in North England. john says ” the incident is a reminder and Hadeeth moment”. What that really means will become clear in the video.

John Fontain met The Game and his entourage in a restaurant in Manchester initially, to have an interview with him. And faced an unhappy security guard who almost prevented Brother john to pass on the message.Despite of that the decree of Allah swt and the persistence John Fontain  assured the message to be conveyed. John told us ” I said to the security guy hey, I want to speak to the Game, Hey the Game !” “He then looked at me”, ” Do you know Napoleon?” he answered ” yes I do “,  ” I am his friend and  I have a message for you”. At this point The Game looked terrified as if he heard the message before. He answered and said “I am not a Muslim, I’m not interested in Islam”. 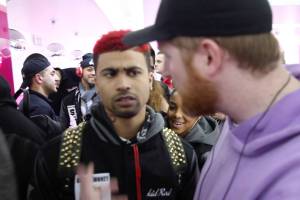 ( Kid red was not exempt from it may Allah guide him)

The moral of the story became clear to  John after the rapper left. It was not The Game’s response but the behavior of certain Muslim at the restaurant. The so-called ” Hadeeth reminder moments” were life lesson and a mirror to the state of mind of the weakest among us.  They say to know the problem of society look at the weakest among them. We acknowledge that anything that happens, occurs for a reason. John Fontain tells us that he is concerned with what he saw, the pain he felt.

The imbalance is reality. On the other side of the world children are dying by eating bullets instead love and justice. Politician and Kings are dying by eating notes and Gold instead of love and justice. Brothers like Moazzem Begg imprisoned out of love to justice. Muslim teenager spiritually dying out of  love to ignorance. In the middle of the turmoil believing people striving for Allah’s pleasures alone. “Believers we live trivial times, where profoundness is privilege to one part  of society and offense to the other part”. Reward is secured for the one who acts accordingly. To fully understand what John saw with his eyes that upset so much, you will have to stick around and wait until the release of the video in an hour Insha Allah, in the meantime ponder upon all the things that have happened recently.